TWO lobsters have been spared the boiling pot – thanks to their bizarre colours.

The unusual pair – one electric blue and one bright orange – could have ended up on a dinner plate in a posh restaurant had it not been for their bright markings.

But local fisherman Keith McKay, 47, was so stunned by their eyecatching colours that he took them straight to Deep Sea World for safekeeping.

The two now share a rock pool in the sea-life centre and causing quite a stir with visitors – quite a difference from the coast of Fife.

Mr McKay, from Buckhaven, has been fishing for more than 35 years and says he has never come across anything like his most recent find.

He said: ‘I’ve never seen anything like this one in my life. I was surprised at how pale a blue it was.

“It was really brightly-coloured. I would call it electric blue. I was so surprised I pulled up alongside another fishing boat to show them what I had caught.” 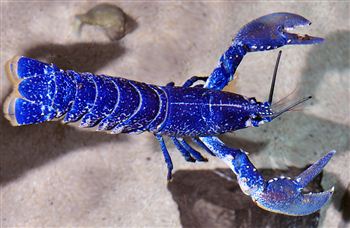 The colourful crustaceans are now enjoying being one of the main attractions at Deep Sea World aquarium in North Queensferry.

Rebecca Ziegler, marketing manager for the centre, said the creatures were drawing huge crowds at their rock pool presentations.

She said: “We welcome these two extraordinarily coloured lobsters. The pair are proving to be a big draw.

“Normally the combination of red and blue pigments in the shell of a live lobster creates a dark, mottled camouflage pattern that blends in with the ocean floor.”

The nippy pair’s remarkable colouring is thanks to a genetic flaw in their pigment.

Instead of having pigments that combined make them their usual olive colour, they only have the blue pigment.

Genetic defects also cause other strange colourings such as light orange, and patterns such as yellow spots.

And some even come in two colours, having half of their shell one colour and the other half a totally different colour.