The 23-year-old defender took time out from training to remember the Tynecastle players who died in the Great War.

At 11 am Berra stood alongside 87-year-old Steven Keeling who served in the Royal Navy for a two-minute silence.

Seven footballers from the Edinburgh club died on the battlefields of the First World War and the Hearts central defender insisted the current crop of players were hugely aware of the sacrifice they made. 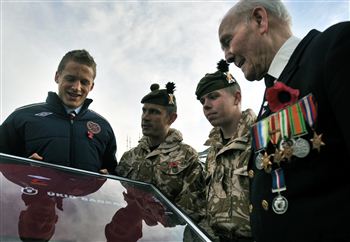 He said: “All the boys are well filled in on how the team that were top of the league at the time volunteered to go away and fight in the war.

“A few of them never came back and that will always be part of Hearts’ history and we will always want to pay our respects.

“Standing throughout the two minute silence you do think about what you would do if it was you in that situation and it makes you realise how brave those guys were.”

After a bugler from The Royal Scots Borderers Battalion played the last post, Berra presented a Hearts football strip to the Erskine charity which provides residential care for veterans.

The framed shirt – with an embroidered poppy and the word ‘Remember’ underneath – was worn by the captain during their win over St Mirren at Love Street on Saturday.

“It’s been fantastic for us to have Christophe here showing his support. He’s a great role model and knows very well what this is all about.”

The Erskine charity – which has five homes across Scotland – was founded in 1916 and provides nursing and medical care for former members of the armed forces.

Speaking at the Edinburgh home – which is undergoing an £8million extension – Mr Scott said it poeple often didn’t realise that young soldiers wounded in the recent conflicts in Iraq and Afghanistan were being cared for.

“We must never forget their sacrifices and the sacrifices that soldiers are still making.

“As a role model it’s significant to see Christophe Berra coming up here and respecting the war veterans we have here today.”

And the club captain welcomed the news that the Hearts war memorial is to return to its Haymarket home when the capital’s tram works are finished after fears it might be relocated to a permanent home elsewhere in the city.

The clock – which is to be placed in storage until 2011 to allow road works at the junction – was built by the Gorgie club in 1922 to remember the players who swapped the dugout for the trenches.

Berra said: “All the players and the whole backroom staff at Tynecastle were at Haymarket on Sunday morning.

“We go there every year and it’s a very emotional day. This year there was a big turnout and the boys all paid their respects.”

The 1914-15 team were enjoying a successful season before war broke out, winning their opening eight games but Celtic went on to win the league.

The team went off to war as part of McCrae’s Battalion – an Edinburgh unit created in 1914 by Sir George McCrae – and more than 400 Hearts shareholders and fans followed their lead and joined up.