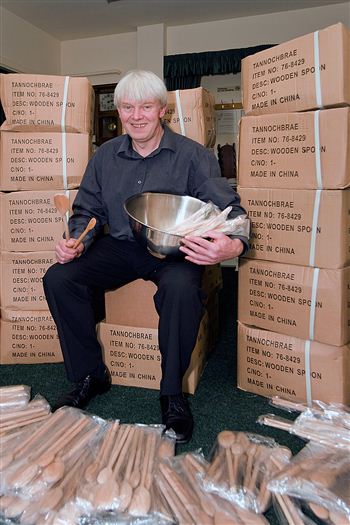 A SCOTTISH cake maker is hoping to mix it with millionaires with a “revolutionary” take on the wooden spoon – which he insists is NOT a spatula.

But Dragon’s Den won’t be seeing an appearance from “Spon” inventor Neal Robertson – he’s worried they’d laugh at him for being “too wacky.”

Instead, the 51-year-old Fife tearoom owner is sending his double-backed spoons to celebrity chefs like Gordon Ramsay and Nigella Lawson in a bid for the baking big time.

“Proud as punch” with his creation, Neal said: “It took me 12 years of making cakes to come up with this – I’m just annoyed I didn’t think of it sooner.

“It’s heavier than a spatula, so it’s not a spatula, neither is it a spoon – it’s a Spon.

“Scotland gets enough wooden spoons in sport – I’m just doing something useful with them.”

The Spon has two flat sides, and as well as solving the problem of clogged up cake mixture, its inventor says produces a smoother mix resulting in lighter cakes.

Now he’s got it patented and manufactured in China, and has 18,000 to shift.

He said: “Cakes look and taste a million times more professional when you use a Spon.

“Now sieving flour is history – just chuck everything into the bowl at once and you can mix it all in one go.”

He took his first delivery on Monday and already has 120 advance orders – most of which are for bulk batches of Spons, selling at £5 each.

So far his customers have mostly been “women’s rural types,” but the Tannochbrae Tearoom owner hopes to win over a younger market.

He added: “When you tell people they can cut down on washing up, they perk up.

“You can use it on anything from browning mince to porridge, soup and scrambled eggs, and none of it will get stuck in the spoon.”

“As long as they use my Spon I don’t care if I make a million from this or not.

“There was a while where I wondered if the idea was a bit too wacky and I thought Dragon’s Den guys would probably laugh at the idea.

“But now I think it’s a brilliant idea, because it could revolutionise the way we bake, cook and wash.

“I’ll send some to Nigella, Nick Nairn, Gordon Ramsey and Jamie Oliver and see what happens.

“I’ll make my investment back with these orders, so anything else is a bonus.”