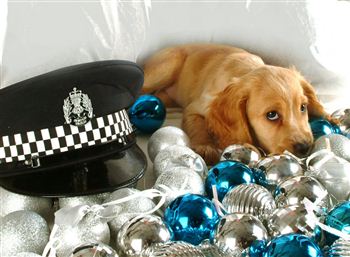 MEET Fern, the police pooch armed with huge eyes big enough to melt the hearts of even the coldest criminals.

The four-legged law enforcer will be trained to help investigators sniff out poisons and detect criminals’ hidden cash.

She was gifted to cops by a breeder in Jedburgh, who singled her out for her nifty nose.

Fern is now settling into her new life with her handler Constable Ron Anderson, who is also the Force’s dog training instructor.

Ron said: “Fern is only eight weeks old so at the moment it’s about familiarisation and socialisation, getting her used to different places and meeting new people.

“While she definitely has the ‘cuteness’ factor at the moment, she is no different to any other police dog.

“All of our dogs are a vital resource when it comes to preventing and detecting crime, whilst at the same time maintaining public order.”

Tayside Police already have specialist dogs trained to sniff out everything from drugs and explosives to firearms and cash.

But Fern’s career will be as the force’s first ever poisons dog.

Ron added: “Among other things, she will be deployed alongside wildlife officers, sniffing our where poisonous substances have been illegally used.

“She will also be trained to sniff out cash and will play a role in helping officers locate money during searches of vehicles, people, and properties.”