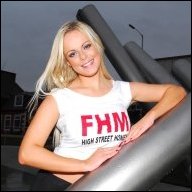 BY DAY she helps to save lives in one of Scotland’s busiest hospitals – and by night she strips off to further her career as a glamour model.

Sexy nurse Kirsty McDaid will certainly be raising men’s blood pressure throughout the UK as she bids to be crowned FHM’s High Street Honey.

The lad’s mag is currently looking for a new glamour star and the Scots nurse has been tipped as a possible winner.

Kirsty, 22, from Lochgelly in Fife, has made the top 100 list of lovelies, and with the voting closing tonight (Thu) the stunner is looking for all the support she can get.

And she has revealed she is so popular at the hospital where she works that some of the admiring doctors have taken to putting her image on their phones.

Currently working as a phlebotomist at Queen Margaret Hospital in Dunfermline, Kirsty says she is just looking “to make Fife proud” of her.

She said: “Yes. It’s true some of the doctors have put my photo on their phone, but it’s all just a bit of fun. I’m quite flattered by the attention, really.

“I didn’t know much about the competition before but I’m pleased to take part.”

The mum-of-one was entered into the competition by a close friend who sent saucy pictures of her to FHM.

She then received a phone call and headed down to Manchester for a filmed interview.

The Scots stunner now faces a public vote to see if she can break into the top 10.

A further vote will decide the ultimate High Street Honey who will receive prize money of £10,000, a chance to appear on the front cover on FHM and an opportunity to audition to become a TV presenter.

She said: “I need as many votes as I can get. I’m a down to earth girl-next-door type, and really want to make Fife proud.”