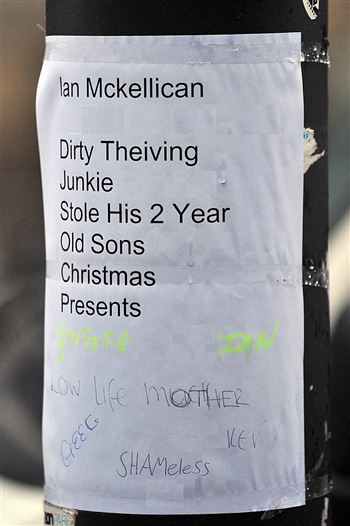 A MUM has covered Edinburgh in posters accusing her ex-partner of stealing their son’s Christmas presents.

Patricia Malloy, 37, says she wants to name and shame the man she claims “is just like The Grinch.”

She plastered the capital with around half a dozen posters alleging former lover Ian McKellican, 33, was a “dirty thieving junkie bastard (who) stole his two-year-old son’s Christmas presents.”

But Mr McKellican denied nicking any presents, and claimed he was clean of drugs and working for a charity.

Miss Malloy said: “I put them up because I want to name and shame him.

“I would kill Ian if I could, and I’m changing my son’s surname because I don’t want him associated with him.

“He robbed off a helpless child like The Grinch, but it’s not sympathy I want, it’s justice for my son.”

She bought her son a bike, a scooter, a toy workbench, an art set and playdough on Saturday.

But she says she couldn’t carry them all home, so left them at then-partner Ian’s house, before the pair fell out later that night.

Now she claims he sold the toys to pay for drugs.

She added: “He is back on heroin and that’s why I don’t want anything to do with him.

“I don’t want anyone to feel sorry for me or my Junior, we aren’t a charity case.”

Police are investigating the posters, with an insider saying they had found three on the city’s Chambers Street, as well as Leith Walk – over a mile away.

Raging Mr McKellican said he was worried the posters could see him lose his job.

He said: “I’m so angry, the steam is coming out of my ears.

“I can’t believe what she has done, and the trouble I might now get.

“Of course I’ve not stolen the presents – they are still under my bed.

“I am trying to sort my own life out; I’ve got myself off drugs and work with homeless people.

“It’s a job where you can be drug-tested at any point, and I wouldn’t risk losing my job.”

A spokesperson for Lothian and Borders Police said they had not received any complaints about stolen Christmas presents.