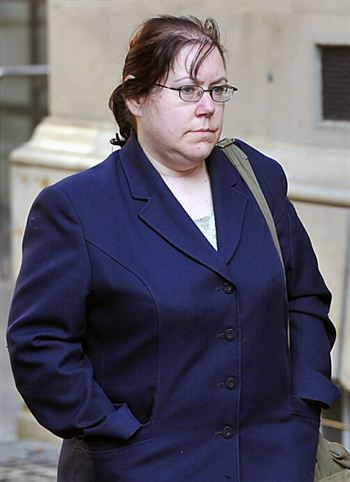 A DISGRACED solicitor who stole over £130,000 of clients’ money has been jailed for three years.

Valerie Macadam, 52, embezzled the money by cashing in the estates of her clients and siphoning the cash to a firm she ran with her ex-husband.

She stole over £35,000 from a vulnerable old lady, as well as taking money from her own cousin.

Macadam – now known as Valerie McKenzie – claimed she had been “weak, vulnerable and depressed” when she “borrowed” money from accounts to help pay off debts but insisted that she had intended to return the cash.

The former property lawyer, who has been struck off by The Law Society of Scotland, had claimed that her “domineering” husband had coerced her into taking money from the estates of clients – both dead and alive.

But yesterday (Wednesday) at Edinburgh Sheriff Court she was caged after earlier admitting embezzlement.

Sentencing, Sheriff Douglas Allan, slammed the theft as “one of the most serious breaches of trust” there is.

Californian born Macadam, who was licenced to practice law both in Scotland and in America, was running successful Edinburgh firm Macadam SSC.

But the Law Society received complaints from clients about the length of time the firm was taking to wind up estates, as well as complaints from two cashiers who said there were account discrepancies in the company.

The governing body investigated and found a shortfall in the firm’s client account. The courts appointed a judicial factor – similar to an administrator – to oversee the day to day running of the company and safeguard client’s cash.

And the probe uncovered several cases of embezzlement between March 2001 and November 2003 where Macadam wrote to banks or building societies asking them to release the funds of her clients to her before pocketing the cash.

Macadam was struck off and criminal proceedings were taken against her. She admitted the massive theft in November and sentence had been deferred for background reports.

Her solicitor, Nigel Beaumont, claimed she had been bullied into the thefts to satisfy her former husband, David, and her own bills and used the estates as “loans” which she believed would be paid back by realising money tied up in property.

He said: “Her early relationship with David Macadam was difficult for her, she said he is a domineering man who sometimes frightened her. She had tried to separate from him at certain points and tried to stay away from him but was not able to.”

Mr Beaumont said that despite Valerie’s woes, David Macadam continued to enjoy a “considerable estate” of between £500,000 and £1m, including property in Florida.

He asked that Macadam be spared jail adding that despite her general ill-health and depression she would be able to carry out community service.

Sheriff Douglas Allan said: “The starting point for this has to be that you were a solicitor and took an oath as a solicitor. You held yourself up to the public as a person of upmost trust and honesty. You continued to hold yourself out to the public all through this.”

“Embezzlement by a solicitor is one of the most serious breaches of trust that can occur.

“Whether or not it was to maintain a lavish lifestyle, and I’m not saying it was, the public would still be out if it were not for your fellow solicitors contributing to a guarantee fund.”

He added: “I do not see anything that suggests I can consider anything other than a custodial sentence.”

Macadam, of Comiston Drive, Edinburgh, was jailed for three years, which was reduced from four years because she pleaded guilty.

After the sentence Philip Yelland, Law Society of Scotland director of standards, said: “The Law Society acted to protect the firm’s clients and Ms Macadam has not been able to practise as a solicitor in Scotland since 2004.

“Solicitors are trusted to handle millions of pounds of client funds each year. Honesty and integrity are absolutely paramount within the solicitors’ profession and those who are suspected of stealing from clients will be investigated and, if they are found to be acting dishonestly or fraudulently, strong action will be taken against them, both by the Law Society and the courts.”