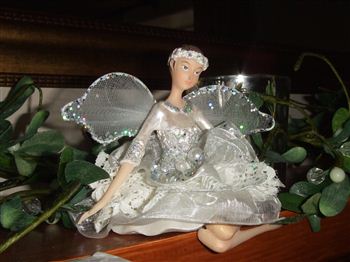 A HEARTBROKEN family has had their Christmas wish come true – the return of a stolen angel from their stillborn baby’s grave.

The Somers family were left devastated last week after visiting the grave of their baby girl Maggie, only to find a sneak thief had stolen the cherished memento.

The family had hoped it had been taken in all innocence by a playing child, but could not rule out desecration by an adult vandal.

But, just days later the angel has re-appeared – prompting Mrs Somers’ to claim “a little Christmas miracle has occurred”.

Jane Somers, 36, from Jedburgh, put the small white angel on the tiny plot two weeks ago, but was disturbed to find it missing last week during a visit to the grave.

And the upset mum was also worried Christmas presents she and the family were planning on putting down would also be stolen or vandalised.

Mrs Somers, who gave birth to the stillborn girl on October 18, admitted she would be left broken-hearted if the little Christmas tree and the presents were taken.

But just last week the Borders’ couple, who have two children Katie, six, and Tommy, three, were overjoyed to find the ceramic angel had been returned.

David Somers, 40, said: “My mother-in-law went up to visit Maggie’s grave as Jane has been too distressed to go ever since the angel went missing, and just in case something had happened to the Christmas tree.

“When she came back in tears we really feared the worst. But she then told us that she had found a plastic bag with the angel inside on top of the grave.

“My wife was crying with happiness.

“This really has restored our faith in humanity and we are delighted to have our baby’s angel back after her little adventure.

“We really feel as if a little Christmas miracle has occurred.”

The family is taking comfort by placing small items at the child’s grave until a headstone is erected in the New Year.