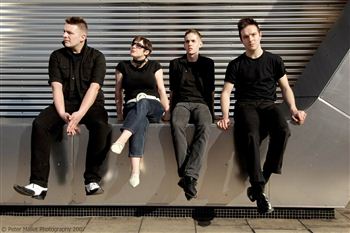 SCOTS rockers Glasvegas have given the biggest hint yet that their much-anticipated second album will be recorded next year.

The award-winning four-piece have just released a new six track Christmas album, but fans are desperate to hear the follow up to their eponymous number two hit album.

And guitarist Rab Allan has admitted some of the new songs are almost ready to be performed live before the band hit the studio in the summer.

Frontman James Allan suggested last month that the new Glasvegas album could be years away from completion, but bassist Rab now claims they are planning a visit to the studio a lot sooner than that.

He said: “Summer is most likely. James likes to throw curveballs – maybe it’ll be years before we make a new record. But he reckons he’ll have enough songs written by next summer.”

“James has got two new songs he’s happy with, but they aren’t ready enough to play live just yet.

“James played one of the songs to the rest of the band for the first time a fortnight ago. It’s amazing, absolutely beautiful, considering it’s such a simple song.”

And there was further good news for the group as the biggest rock radio station in Sweden, Bandit Rock, has also nominated the band in two of their awards categories for Best International Album and Best International Breakthrough.

International success now seems to be following the Daddy’s Gone hit-makers as their forthcoming US tour has almost completely sold out.

As well as prestigious shows in New York, San Francisco and Los Angeles, Glasvegas are also due to perform on the popular TV chat shows Late Show with David Letterman and The Late Late Show with Craig Ferguson.

And even though this year has been a runaway success for the Dalmarnock outfit, James Allan admits he still sometimes finds it difficult to enjoy it.

He said: “My life can be a f***ing mess sometimes. Things have run away from themselves. I’ve been quite ill. I flew from Romania to Rome to London to Aberdeen for a gig, and the next day I woke up sweating and sick and seeing ghouls.

“That was a few weeks ago and it’s only now the sky is getting a bit bluer.

“Some things are difficult but there are so many things in my life that are beautiful and outrageous and amazing.”