By Cara Sulieman
SANTA is a common sight at this time of year, bringing joy and cheer to children and adults alike.

But scrooge residents in Edinburgh are trying to put a stop to one Mr Claus – because he is making too much noise.

During the day, Jason Lawe, 25, works at the P and R Powerwash in Corstorphine, but by night he dons his Santa outfit and waves to passers by at the winter wonderland.

It has all proved too much for the residents of Drum Brae Road South, who have complained about car horns going off and loud Christmas music being piped out over the garage forecourt.

The garage owners claim it isn’t their fault that drivers toot at Santa as they pass by, and that they do nothing to encourage it.

Andy Marshall, 29, owns the garage and is shocked by the complaints made against them.

He said: “When the guys from the council came round I thought they were coming about the music, but they said that wasn’t a problem. Then when they said they had had complaints about Santa I couldn’t believe it.

“He doesn’t make a noise, he just sits and waves at the cars. When the drivers toot back it’s not like they have their hand on the horn for ages, it’s just a quick beep beep.

“We just want to say to the people that complained, and to the council, show a bit of festive spirit.”

The team at the garage are now scared of annoying their neighbours and have turned down the music and removed Santa from the site.

Jason is upset at the situation as he enjoyed being Santa and bringing some festive cheer to the neighbourhood.

He said: “Who would complain about Santa? It is just for the kids. I give them a lollipop and ask them what they want for Christmas. What’s the harm?” 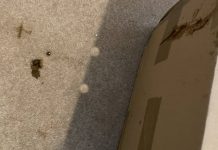