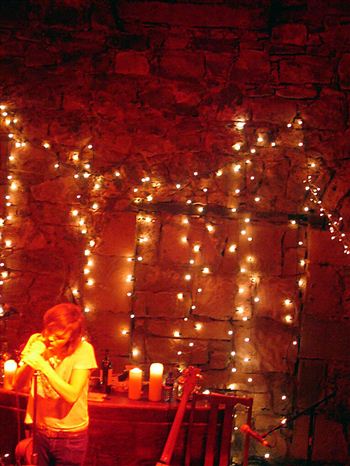 SCOTS rockers Idlewild last night gave fans a killer guide of Glasgow before kicking off their week-long gig stint in the city.

They revealed an online rundown of the “murder and heart disease capital of Europe.”

The band are playing every one of their five albums in full to just 250 fans each night until Sunday at the city’s iconic King Tuts venue.

With tickets long sold out they are now fetching up to £130 a pair on the internet black market.

The bands’ Glasgow guide is aimed at their travelling fans, around half a dozen of whom have travelled from America with tickets for all five gigs.

Bassist Gareth Russell joked: “Glasgow is the murder and heart disease capital of Europe but there’s no need for you to resort to fish suppers and Buckfast five nights in a row.”

Of the city’s main thoroughfare, Sauchiehall St, Gareth says: “It’s mainly chewing-gummed concrete by day, and by evening is a stunning catwalk of orange-hued ladies defying the sub-zero temperatures.

“However, there’s some very decent and relatively undiscovered bars and restaurants.

“If you head up to the West end – essentially the posher, greener part of town – The Rio Cafe is a good shout for a bit of soul-jazz, silent martial arts films, coffee, cooked breakfast, cake and beer in a 50s diner-style setting.”

And with vegetarians among the five-piece, their hitlist of Glasgow’s finest also includes “hidden gems” Mono and Stereo – serving vegan-friendly pub grub.

Last night (Wednesday) they played hits off their debut album Hope Is Important, but the tickets most in-demand are for Friday when they play their album The Remote Part which charted at number 3 in 2002.

Their songs include top-ten hit ‘You Held the World in Your Arms’ and ‘American English’ which got to 15 in the charts.

Singer Roddy Woomble said: “It’s going to be funny doing ‘Hope Is Important’ and ‘Captain’ because they were written by a band of 19-year-olds and we play them really differently now.

“Actually we need to get rehearsing as there’s a few songs we’ve never done live!

“But the spirit of this week of gigs is not about perfection, it’s about putting on something really special.”
Idlewild’s King Tuts residency dates, with a different album played each night: