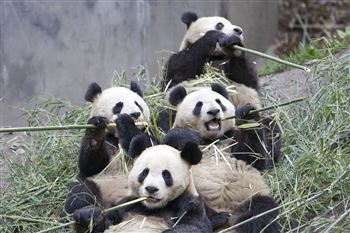 GORDON Brown has shown his soft side by backing a campaign to bring pandas to Scotland.

The prime minister hopes Edinburgh Zoo will be able to encourage a pair to have cubs.

Zoo bosses are deep in talks with Chinese officials for a ten-year loan of the endangered animals starting in 2010.

They said Brown’s support was “essential” to the endangered animals’ breeding plan.

If successful, Edinburgh would be only the eighth zoo in the Western hemisphere to care for giant pandas.

In a letter to the Royal Zoological Society of Scotland, Brown said: “The Government strongly supports international co-operation to promote the conservation of the world’s wildlife.

“We therefore welcome the progress which the Royal Zoological Society of Scotland has made in its discussions with the Chinese authorities and wish you continuing success in bringing these discussions to a satisfactory conclusion.”

The move came after worldwide population figures of wild giant pandas plummeted to 1,500.

Scottish zoo bosses hope the past twelve months of talks will result in a formal agreement with the Chinese Government.

It would see Edinburgh Zoo collaborating with Chinese conservationists on research projects and providing what they say would be “substantial funding” to support giant panda conservation projects in the wild.

David Windmill, chief executive of RZSS, said: “The process of bringing giant pandas to Scotland is a long and detailed one that requires political co-operation at the highest level so having the support of our Prime Minister is essential.

“Discussions will now continue with key officials in China and we hope to welcome giant pandas to Scotland in 2010.”