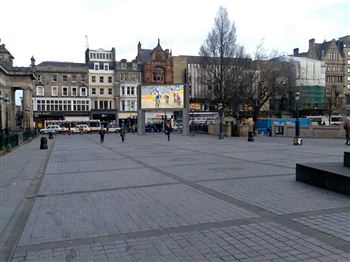 By Michael MacLeod GRUMPY gallery bosses have hit out at a plan to show major sporting events live on a jumbo screen on their doorstep. The massive 280ft TV screens will appear across the country in the run up to London’s 2012 Games, showing highlights of Chris Hoy’s Olympic triple gold glory among the clips. But the plan has been branded “wholly inappropriate” by officials at Edinburgh’s National Gallery of Scotland, who moaned that the screen will spoil the capital’s views. The BBC have offered £1million to Edinburgh City Council to lease the screen for ten years, and the council have earmarked two possible sites – the other being opposite the Sheraton Hotel in Festival Square. 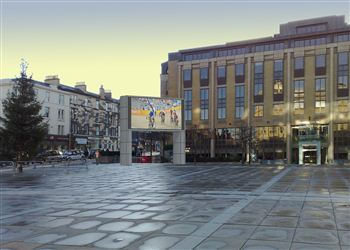 Olympics bosses want 60 screens at Live Sites, across the UK, with London 2012 Chair Sebastian Coe backing them as “a fantastic idea.” Glasgow’s St Enoch Centre is expected to have one of the 26-metre-high screens incorporated into its redevelopment, while Manchester’s screen is installed on the side of a Grade-one listed building. But the plan for Scotland’s capital sparked fury from directors of the National Gallery, who are worried it will clash with its surroundings. They said: “The Mound site has some of the finest architecture in Edinburgh and features some of the best city views anywhere in Scotland. “It would be wholly inappropriate to site a giant TV screen at this location.” A council insider said they wanted the screen up before Scotland’s football world cup qualifier with Iceland on April 1, so fans could see the action from Glasgow’s Hampden live in Edinburgh. They added: “The race is really on now, because if the gallery’s objection is upheld, Ministers will get involved and we’ll miss the chance to show what could be a vital game.” But after scouring the city for over a year and ruling out sites including one end of Princes Street, council bosses are anxious not to miss the April 30 deadline to accept the BBC’s offer. Now councillors in the city will decide on the merits of the giant TVs, with Ministers making the final decision if the gallery’s complaint is upheld. As well as football, major sporting fixtures are planned for the screen including Six Nations rugby matches and tennis hero Andy Murray’s Wimbledon showdowns, raising the possibility of Edinburgh’s iconic Mound being renamed Murray Mound. The Mound precinct recently got a £30 refurbishment as part of the £30 million Playfair project to link the gallery’s two buildings. Lord Coe said: “The Live Sites are a fantastic example of a project created because of London 2012, but one with a life well beyond the Games.” A spokesman for the council said: “We are aware of the gallery’s objection, but the Mound is our preferred option.”