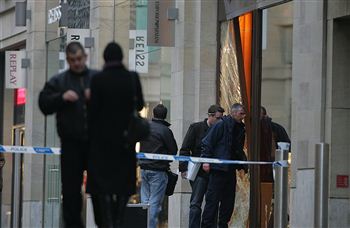 DESIGNER handbags worth more than £10,000 have been stolen during an early morning ram-raid.

The luxury bags were taken from the Mulberry store in Edinburgh’s trendy Multrees Walk after a 4X4 vehicle smashed through the glass front.

The black Daihatsu was spotted reversing into the shop before thieves snatched eight of the exclusive handbags worth between £1,200 and £1,500 each.

It is likely the expensive items – a must-have accessory for A-listers such as Kate Moss and Sienna Miller – will now be offered for sale at a knockdown price by the thieves.

The raiders also damaged the front windows of designer eyewear specialist Oscar and Fitch – situated across from the Mulberry store.

The stylish glasses store was targeted in the 5am raid – with the shop front smashed as the car reversed through the display windows.

The 4X4 vehicle was last seen on James Craig Walk heading left on to Princes Street.

Mulberry is next door to plush department store Harvey Nichols and it is the second time the upmarket accessories shop has been hit by ram-raiders.

In September, fashion-conscious thieves made off with up to £30,000 worth of designer handbags after a small black car reversed through the shop window.

The raid four months ago happened on the closing night of the Edinburgh Festival and the shop was completely ransacked.

On Tuesday morning, Lothian and Borders Police cordoned off the precinct – home to other upmarket stores such as Calvin Klein and Louis Vuitton.

A spokesman said it was important that anyone being offered cheap designer labels should be vigilant.

He said: “Anyone who thinks they may have been offered any of these stolen items should report it to the police immediately.

“We would also appeal for anyone who saw the black car driving at speed in the area around Multrees Walk at 4.50am on Tuesday to get in touch.”

Last night, Mulberry declined to comment on the incident but the store was due to reopen today for business on Wednesday.

Bendy bike to beat off thieves