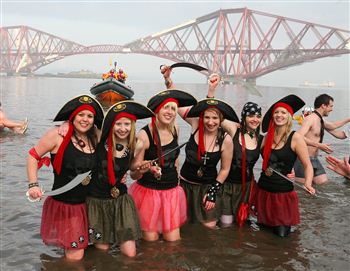 HARDY revellers braved the bitter cold to take a dip in the icy waters of the Firth of Forth to welcome the New Year in style.

Around 600 swimmers – many scantily clad in thongs and bikinis – plunged into the sea as thousands watched on.

Characters including Elvis, wonder-woman and banana-man were guided by a piper along the streets of South Queensferry for the annual ‘Loony Dook.’

And the event – now in its 23rd year – is proving a firm favourite with tourists coming to Edinburgh for Hogmanay.

Steve Paterson, 24, arrived in Scotland from his home in Australia for Hogmanay celebrations and decided to enter the dook after hearing about last year’s swim from friends.

The Sydney man ran into the water wearing just a pair of shorts and an inflatable kangaroo strapped to his back.

He said: “I usually take a swim in New Year’s Day but it’s on the beach in Australia in 30 degrees of sunshine.

“This is a bit different – it was absolutely freezing and my feet have turned numb right now.

“I was at the street party in Edinburgh last night and I thought I was going to be sick this morning with a hangover but this has sorted me out.

“I can’t believe how many loony people there out here today. There’s nobody crazier than the Scots.”

Also taking part in the plunge was a group of six girls dressed as pirates – who have returned to the annual swim for the third year running.

Clair Jenkins, 22, from Falkirk said: “We just love it. It’s become a part of our New Year now and we’re definitely getting used to the cold water now.”

Her friend Amy MacLeod, 23, was carried out of the water by fellow pirate Katrina Henderson after losing her shoes as she dived into the sea.

She said: “I have lost the feeling in my toes and can’t stop shivering.

“We wore bikins last year and thought we might be a bit warmer today as we’re wearing a bit more but that didn’t happen.

“I’m looking forward to getting into a warm bath now.”

The group – who are all friends from Falkirk – decided to take part in this year’s Dook to raise money for the Strathcarron Hospice.

Danielle Brown, 24, said: “We have managed to get about £200 for this. Everyone thinks we’re a bit mad but we think it’s brilliant and would tell anyone thinking about taking part to just go for it.”

Other characters included a group of men from Bo’Ness jumping in wearing gold thongs.

Andrew Gourley, 25, said: “It is so cold. It feels like a million needles are piercing my body right now.

“We just decided to do it for the banter and to get rid of the hangovers. We saw the gold thongs in the sale for £1 and that was our costume sorted.”

Crowds of spectators lined the streets and the shoreline to watch as the dookers as they frolicked in the water.

The swimmers included clowns, superheroes, men dressed as brides and a nun.

The world-famous event – which started with just two swimmers in 1987 – is organised by David Steel and watched by tourists from around the world.

Mr Steel said: “I don’t know how many registered officially but it’s around 600 – our biggest ever number.

“I am delighted with all the characters taking part this year and the money they all raise for many different charities.

“I think it is getting more and more popular because word is spreading and it is in such an iconic spot under the bridges.”