Sir Sean: I can’t speak to my wife 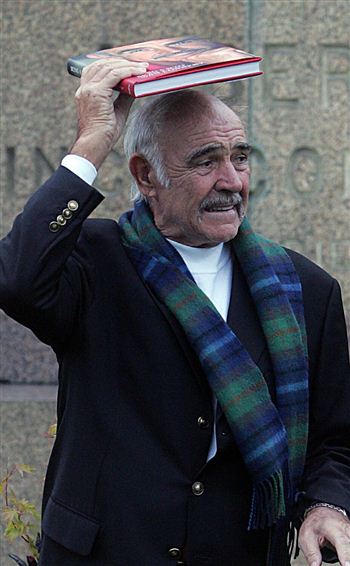 SIR SEAN Connery has admitted not being able to speak to his wife is the secret behind his happy marriage.

The former Bond star has been married to French wife Micheline for over 30 years, but still cannot speak a word in her native tongue.

And the 78 year-old screen legend insists the language barrier does not stop the pair from having heated arguments – instead claiming their tiffs keep their relationship strong.

He said: “I don’t speak a word of French but often think that what should be a handicap is actually a godsend.

“She may only be half my size but she’s got a few snappy comebacks. We’re total opposites – that’s what has kept us together all these years.”

The ad sees various Scottish celebs singing a line each from Dougie McLean’s anthem Caledonia – although Sir Sean decided in the end to speak his line.

Filmed to entice those with Scottish ancestry to visit their homeland during 2009, the £200,000 advertising campaign has been branded “a waste of money”.

He said: “The First Minister and the SNP are more interested in publicising themselves and Scottish identity in Scotland than in promoting Scotland as a destination to those who live elsewhere.

“The whole Homecoming idea – which we began five years ago – was to increase tourism and promote Scotland, leading to more jobs. We wanted those with Scottish ancestors to consider returning.

“This advertising campaign is a waste of money. The first minister has been hijacking the campaign for his own personal crusade. Scotland should be outraged. I am.”

Connery is not the first celebrity to reveal the secrets to his happy marriage.

She said: “We have something called naked Sundays. You have to keep marriage alive, spice it up. We don’t need to go anywhere, we’re just with each other. We do everything naked. We even cook naked.”