A LOOMIS security driver who pocketed over £5,000 of cash he was paid to pick-up from shops because he was struggling with mortgage repayments has avoided jail.

John McPhee, 28, fudged collection forms detailing how much money he collected from Tesco and Woolworths stores before stashing the cash in his car. 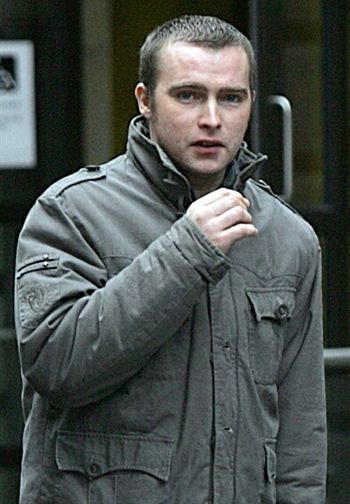 He also switched security bags to cover-up the stolen money before swiping his illegal cut and using it to live off of.

McPhee, who was sacked following the thefts, told police he took money because he “thought it would solve some of his problems”.

But his scam was rumbled after bosses at Loomis investigated discrepancies between an automatic scanning system and McPhee’s hand written route forms.

At Edinburgh Sheriff Court he ordered to repay £5,365 to Tesco and Woolworths after sneaking money from their stores in summer 2007.

Sheriff Ailsa Carmichael described the sneaky scam as “a breach of trust” and ordered him to do 240 hours of community service.

The court heard how McPhee had been working as a driver custodian for the security company, driving around shops picking-up money to bank.

He would collect the money, putting it in a sealed bag with a unique barcode which was scanned to record how much was in it.

But McPhee would fiddle his own paperwork and scan fewer bags than he should have as part of his con.

He also switched money bags so that he could take money without anyone noticing.

But when his scam was uncovered, police interviewed him and he admitted he had taken £1,305 from a Tesco store in South Queensferry in July 2007.

McPhee told officers: “There were hand held scanners and I scanned the money bags but for some reason it did not scan properly. When I noticed it didn’t tally I realised it had not registered.”

He took his chance to take the money, thinking he would never be caught.

McPhee said he had been struggling to pay his mortgage and, despite trying to sell his home, he could not find a buyer.

He said: “I put it in my holdall, I took it home with me at the end of my shift and kept it in my car and spent it as I went along.”

McPhee denied any knowledge of similar thefts at Woolworths and Scotmid shops in Edinburgh despite staff members claiming he took the money.

Several members of staff from Woolworths spotted a £4,060 theft from a shop in Lothian Road, also in July 2007.

Sheriff Carmichael also returned a not proven verdict on an alleged £1,680 theft from a Scotmid after a one day trial in October.

But a lone worker at Scotmid was unable to corroborate the allegation he also nicked £1,680 from an Oxgangs supermarket in June that year.

Depute fiscal Karen Rollo said there was “a clear pattern that shows he systematically stole from his employer”.

She told McPhee: “You had a scam going that allowed you to steal. You took advantage of the method in which that scanner operated to steal.”

McPhee remains unemployed and must pay back the money at £20 per-week.

His lawyer George Henry said: “He is a family man and and it seems that the motivation for the offences relates to the very significant financial problems the family face.

“He has shown genuine remorse and is desperately keen to repay this money.”

Sheriff Carmichael added: “This is a matter involving a breach of trust which the court takes very seriously.”