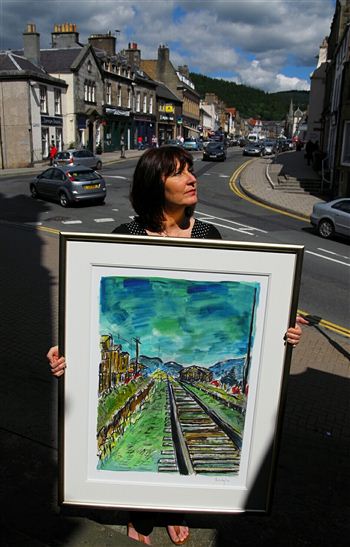 ORGANISERS have their fingers crossed that Bob Dylan will make a surprise appearance in Edinburgh when his exhibition of paintings is unveiled this week.

The living folk music legend put down the guitar to turn his hand to art, mustering up 100 paintings, sketches and even computer-enhanced pictures.

And with Scotland already in his horizons for a UK tour, Dylan could soon be a familiar face in the capital.

Dylan made most of his “Drawn Blank” exhibition while on the road between 1989 and 1992 – a period when he took great effort to hide from the media.

But now he stars on television adverts and even has his own weekly radio show – ‘Theme Time Radio Hour’ – on BBC radio 2 and 6music, which is syndicated worldwide.

An exhibition insider hinted that Dylan may show up at the exhibition’s opening at Edinburgh’s City Art Centre on Saturday.

They said: “Two years ago he randomly bought a mansion near Inverness, and even his management tell us they don’t always know where he is.

“He’s touring here in May, so with a house just up the road, who knows – we’ve got our fingers crossed he’ll be here.”

The 68-year-old US songwriter stunned locals in the Scottish Highlands when he was reported to have bought Aultmore House near Nethy Bridge in 2007.

Even if the man himself doesn’t show up in person, the exhibition’s curator Ian O’Riordan says the artwork is as close as most people will get to knowing the real Bob Dylan.

He said: “The fascination of Drawn Blank is that it shows what has to be his real life.

“He’s such a mythologised and self-mythologising figure that these works are as close to his actual life as we’re ever going to get.

“The surprising thing is that he does seem to be quite an outsider; he does have this tragic side to him.”

Dylan’s exhibition helped to put a tiny Scottish Borders gallery on the map when it made its debut last summer.

The Breeze Gallery in Peebles squeezed 2500 people through the doors in a week and sold out their allocation of prints four times over.

Bob Corsie, the gallery owner, said: “The Dylan exhibition was an unprecedented success for our gallery.

“We sold out of all 29 pieces we originally had and were lucky enough to secure 11 more from Dylan’s agent.

“They will be sold on a first come, first serve basis as we feel that is the fairest way to do it. Really, we could have sold double our allocation quite easily.”

Dylan has painted for forty years of his five-decade music career, in which he has sold more than 110 million albums and performed literally thousands of shows around the world.

His most recent album, Modern Times – lauded by critics around the world and selling more than 2.5 million copies to date – entered the American album chart at number one, as well as debuting within the top five in 21 other countries.

City culture leader Deidre Brock said: “The City Art Centre is delighted to be opening 2009 with this important collection.

“This is a chance for the people of Scotland to experience a fascinating and different aspect of the artistic creativity of one of the world’s most acclaimed and popular songwriters.”

Artwork owned by Johnny Beattie will be auctioned this month