Guinness toucan snapped up at auction 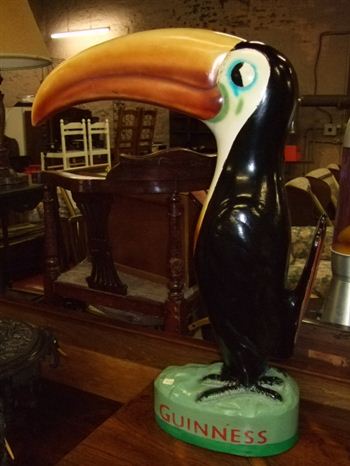 A RARE Guinness toucan statue which attracted interest from all over Britain has sold at auction for over £200.

Collectors were keen to snap up the iconic figure in what is the world-famous drinks giant’s 250th anniversary.

Standing a proud 2ft high, the toucan is thought to date from the 1930’s and originally came from a pub in Dublin.

And although Dundee auctioneers Curr and Dewar were hoping to receive £400 for the statue, it eventually sold to an anonymous local collector for £220.

Auctioneer Steven Dewar said: “The man selling the statue is from Fife, and the toucan had been in his family since the early 1950’s. The story goes his father haggled for it in an Irish pub, but couldn’t remember how much he eventually got it for.

“The landlord of the pub told him it had been hanging on his wall since the 1930’s, and that is all we really know about its history.

“But it really is an iconic piece of pub culture, and one that had lots of interest.

“We had lots of calls from all over Britain, and a few local collectors even popped in a few days before the auction just to have a look at it.

“The buyer is a local man who has bought quirky items from us before. He looked really pleased with it when he left.”

The toucan first appeared in Guinness adverts in the 1930’s when artist John Gilroy created posters for the drinks company depicting various animals including kangaroos, sea-lions and, most notably, the toucan.

The original posters featuring Gilroy’s art work became as famous a symbol for Guinness as the original harp logo.

Mr Dewar added: “There is a huge following for Guinness memorabilia and the company has become famous for iconic advertising and its quirky sense of humour.

“It’s wonderful that the statue has managed to attract an offer of £220.”

The Irish brewers originated in 1759 when Arthur Guinness signed a 9000 year lease on a disused brewery at St James’s Gate in Dublin for an initial £100, and an annual rent of £45.

He first started brewing Dublin ale, but soon diversified into ‘porter’ which then became known as Guinness Stout.

By the late 1960’s Guinness were producing radio and television commercials that featured the talking toucan.