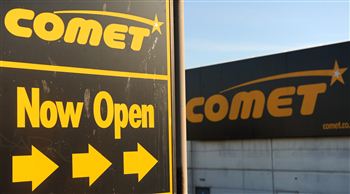 ELECTRICAL giants Comet are planning on charging for shelf-space in a bit to halt crashing profits.

The move could force big-name suppliers like Apple to PAY to get their iPods sold in the shops.

Insiders say it could cost firms up to £15,400 to put anything from a toaster to plasma TV on Comet’s shelves.

While Comet couldn’t reveal details, they admitted they were in talks with manufacturers in light of “challenging times.”

The news comes just weeks after the chain reported an £8m loss for the six months ending October – markedly down on the whopping £10m profit seen in the same spell only a year before.

A source close to the company said many smaller firms were angry at the plans and refused to sign up to the terms.

Comet director Bob Darke is reported to have written to suppliers, telling them the new charges will be imposed from January 1 next year.

In the letter, he is said to have blamed the tough retail market for the new charge, which could see them asking for a “listing fee” for every line stocked in stores.

But one supplier fumed: “The size and scale of what Comet is demanding is unusual and outrageous.

“How are the small guys supposed to have a chance against the big boys if we’re spending the equivalent of a worker’s annual wage just to get into the shop?

“It’s big money and in this day and age it’s hard to free up that kind of cash.”

A spokesperson for Comet wouldn’t deny the claims.

They stated: “In these challenging times our customers are looking for good value and it is our role to negotiate the best possible deals on their behalf.

“We can confirm that we are in negotiations with our suppliers.

“These discussions are commercially sensitive and we will not comment on any of the details.”