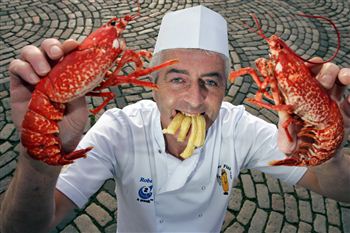 THE BEST chippy in Britain is being urged to change its name – to show compassion to fish and marine life.

The Anstruther Fish Bar is famous throughout the country after winning the prestigious UK Fish and Chip Shop of the Year title in London thanks to its quality suppers.

But now animal rights group People for the Ethical Treatment of Animals (PETA) are asking the shop’s owners to adopt a wacky new name.

They say if the popular restaurant was known as the Anstruther Sea Kitten Bar, then people would think twice about killing sea life for food.

And they claim the business can be kept afloat by selling veggie burgers.

She said: “The owners Mr and Mrs Smith are on holiday just now so the letter hasn’t even been opened. This is the first time I’ve been made aware of PETA’s request and to be completely honest I’m totally speechless.

“I’ve never heard the like, and I don’t really see the connection. I doubt very much we will be changing our name to the Anstruther Sea Kitten Bar.

“It really is a crazy idea.”

But Robbie LeBlanc, PETA’s European Director, insisted that there were alternative products that could replace sea life.

He said: “If this top shop becomes Anstruther Sea Kitten Bar and everyone in the town starts calling fish ‘sea kittens‘, fewer of these gentle animals would be violently killed for food, painfully hooked for ‘sport’ or cruelly confined to aquariums.

“What they lose in sea kitten and chip business can be made up by selling more veggie burgers.”

Industry organisation Seafish, which runs the Fish and Chip Shop of the Year competition, hit back at the animal rights group by stating PETA need to catch up with the modern sea industry.

A spokesperson said: “Forty per cent of fish caught in the UK are captured by boats in the Responsible Fishing Scheme, which guarantees high standards of care for fish both during and after the catching process.

“What’s more, the UK will soon have more fisheries accredited as sustainable and responsible by the Marine Stewardship Council than any other nation on earth.

“Finally, the Anstruther Fish Bar won its award precisely because it is deeply committed to sourcing seafood locally, sustainably and responsibly.

“We would encourage consumers to continue enjoying seafood as much for its great taste as for its health benefits.”

Anstruther local John Lynch, 26, said: “This is absolutely crazy. Who in their right mind would change the name of the restaurant to a sea kittens bar?

“If anything, eating a sea kitten sounds more cruel than just calling them fish.”