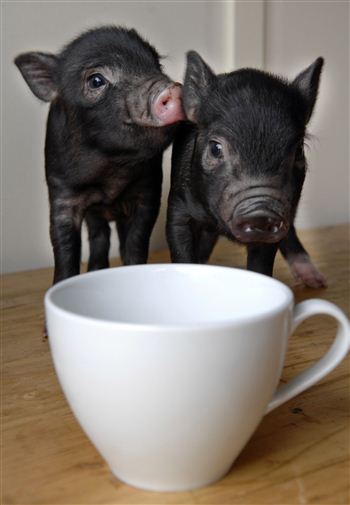 FOUR cute piglets – which are the size of a teacup when born – are the latest attraction at a Scottish zoo.

The unusual animals are known as “micro” or “teacup” pigs and at only two weeks old can easily fit into a mug.

This particular breed of pig only grows to between 12 and 15 inches long after reaching adulthood.

A cross between Vietnamese pot-bellied pigs and Kunekune from New Zealand, the tiny porkers are increasingly becoming popular as pets.

Proud mum and dad Mork and Mindy first arrived at the Five Sisters Zoo, near Polbeth, West Lothian, two years ago and this is the pair’s first litter together.

Owners Brian and Shirley are still to name the new arrivals, and are now being kept on their toes trying to keep up with the “lightning” fast piglets.

Mr Curran said: “We were keeping a fairly close eye on them as we knew Mindy was pregnant, but we weren’t exactly sure when they would arrive.

“In the end it was no trouble at all though, and they were all born in about ten minutes.

“They are incredibly healthy, and it was surprising to see how quickly they were up and about.

“They move like lightning now and it can be difficult to keep track of them, but fortunately they are not straying too far from their heated enclosure at the moment.”

The teacup pigs are becoming increasingly popular to keep as pets, although they are still extremely rare in Scotland.

The animals are seen as ideal pets because they are small, light and can be easily house-trained.