A FOUR-YEAR-OLD boy has been told he won’t get a place at his local primary school – even though he is their poster boy. 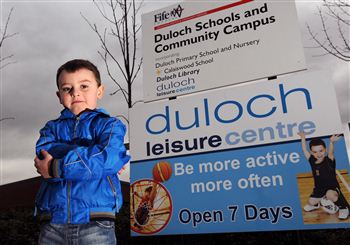 Ryan Girdwood’s face can be seen on all of Fife council’s literature advertising the new community campus – which includes a school, nursery and leisure centre – in Duloch, Dunfermline.

And he even smiles down from a giant poster on the school’s wall after he was chosen for the pictures at an after-school club last year.

But now he has been told there won’t be a place for him at the primary school when he finishes nursery – and he’ll have to attend a school almost four miles away instead.

She said: “I just feel utter disgust at the way this has been handled. Ryan is a poster boy on the council leaflets and the sign promoting the Duloch facilities but he is not getting into the school.

“I was told Ryan could have a place at Inverkeithing Primary but there is no way he is going away there.”

And she told how it is not just her son who will be affected but a further 70 children in the area.

She said: “It’s absolutely ridiculous that they want to put young children who are just starting school on a bus to an area they don’t even know.

“The council can’t guarantee the kids’ safety and it just raises more questions than they can answer.”

The council plan to bus the children out to the school in Inverkeithing until a new school has been completed in Duloch.

But as yet, the council have not even decided where the school will be situated and don’t expect it to be completed until 2011.

And while the youngsters wait, they will be segregated from their fellow pupils already attending Inverkeithing Primary School.

Lauren said: “The council has said they will have different break and lunch times from the Inverkeithing children and will be totally separated. I don’t see how that can cause anything but bullying and other problems.”

And the move is playing on little Ryan’s mind too after he discovered he will be going to a different school than his best friend Callum.

He said: “I’m a little bit sad. I wanted to play with Callum.”

Lauren added: “We had thoughts of them growing up together at school but that won’t happen now.”

Council chiefs refused to comment on Ryan’s role, but defended their overall decision.

Education committee chairman Douglas Chapman said: “I can sympathise with the mother’s point of view and I understand what she is saying.

However, the idea behind starting a new school at Inverkeithing is that albeit it doesn’t have its own building, it will have its own ethos and will grow to the point that when the new building is available the pupils can move in.”