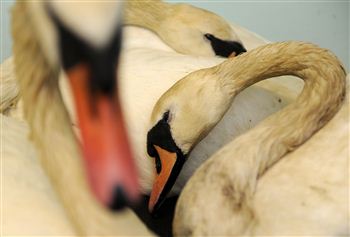 TWENTY swans were among dozens of seabirds covered in oil after Tuesday’s freight train derailment.

The helpless birds bore the brunt of 1,000 tonnes of explosive fuel after a ten-carriage locomotive careered off the rails into fields.

Diesel and heating oil from the train had leaked into water close to the accident spot near Stewarton railway station, Ayrshire.

The oil seeped through the water system to Irvine Harbour where a large flock of swans gather over the winter.

Anxious wildlife experts rushed to the scene yesterday morning, worried that the birds may have swallowed the deadly oil.

With the help of Hessilhead Wildlife Rescue Unit, they also saved geese, eider ducks and cormorants.

The birds have now been transported to the Scottish SPCA’s Wildlife Rescue Centre in Fife, which has a specialist cleaning facility for the treatment of oiled birds.

But they aren’t expected to be returned to the wild for some time, until the water is decontaminated.

Scottish SPCA manager Colin Seddon said: “Each bird goes into a large stainless steel sink in our purpose-built oiled bird facility and we use washing up liquid to remove the oil. It’s a two man job that can take up to an hour per bird.

“They can ingest the oil so we stomach feed the swans with a charcoal mixture to help eliminate toxins from the oil.

“Once they have been cleaned up and are feeding ok then they usually make a fairly swift recovery.

“However, we will not be able to release them back in to the water at Irvine Harbour until all the oil has been cleaned up so they could stay in our care for a while yet.”

The massive clean-up comes a day after staff rescued and washed a chocolate covered pigeon.

They fondly named the bird Wonka after it dive-bombed into a chocolate fountain in a Thornton’s sweet shop in Edinburgh.