Child thrown to safety from flat 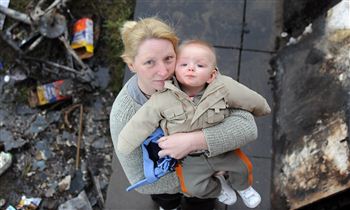 A TERRIFIED mum was forced to throw her eight-month-old baby out of a first floor window as a fire threatened to rip through her home.

Lena Erskine, 36, and her three children were trapped by thick toxic smoke after a communal bin area caught fire at their home in Winchburgh, West Lothian.

Teenagers Manny, 14, and Zeeshan, 16, were able to jump to safety, but Lena had to drop her youngest child – baby Mackenzie – into the waiting arms of her neighbour.

Three fire crews raced to the scene of the blaze which broke out around 1am on Friday.

Last night, speaking from her smoke-damaged home, Lena thanked her hero neighbour Shane Steven, 34, for helping her family get out.

She said: “Without Shane’s help I dread to think what could have happened. Thanks to him everyone is alright and my family are all fine.

“My flat is right above the bin area and I heard a crackling sound just before 1am. I opened my front door but was forced back by thick black smoke.

“I started to panic because I knew we couldn’t get down the stairs and we were all trapped.

“I got all the kids up and herded them to the back of the house. We shouted for help and Manny and Zeeshan managed to jump down onto my neighbours hut – but I then realised I had no choice but to drop Mackenzie out.

“I was so worried, but I knew I just had to get my baby out of there.”

Luckily for the family, their neighbour had been alerted to the family’s shouts for help and clambered onto his shed roof in time to catch the terrified tot.

Lena, a door steward in West Lothian, said: “I thank god Shane was there to help us because I don’t know what I would have done without him. He really is a bit of a hero.”

The mum-of-three also had to lower her Staffordshire Bull Terrier cross Jade into Shane’s arms, but was forced to leave her cat and two cockatiels in the house as she made her own escape.

Fortunately all the animals survived – but the family home has been damaged by the smoke.

Lena also revealed the blaze – which is believed to have been started deliberately – is the fifth fire to have broken out in the bin area of the block in the last year.

She said: “We’ve had trouble in the past with groups of kids hanging about the stairwell. I don’t klnow for certain how this one started but let’s just say there is history here.”

Lena was treated at the scene for smoke inhalation but did not require hospital treatment.

Last night dad-of-six Shane insisted he was no hero.

He said: “I heard the fire through my wall and as I went outside I noticed all the smoke. I shouted up to Lena to hand me down her kids. Luckily everyone got out and nobody was hurt.

“I don’t feel like a hero – I just did what anyone else would do. I was just in the right place at the right time.”

A West Lothian police spokesman said: “We are treating this incident very seriously. This was a totally irresponsible thing for anyone to do that could have resulted in tragic circumstances. We would appeal to anyone that knows who is responsible for setting the fires or to anyone who saw anyone acting suspiciously to contact the Police”.