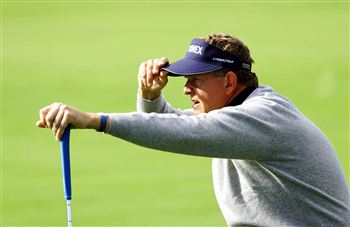 TWO OF Scotland’s finest sporting institutions have been branded “losers” by a Canadian newspaper.

And one of them is surprisingly Colin Montgomerie – who was recently crowned European Ryder Cup Captain.

The Toronto Star has picked a list of ten teams and individuals from around the world who have a track record of losing in their chosen field.

Of the ten global flops highlighted by the paper, only two are from outside North America – and they hail from Scotland.

Colin Montgomerie and Hibernian Football Club are the two tragic Scots who crawled their way on to the list.

Garth Woolsey of the paper writes: “Ten teams and sports individuals who are remarkable for utterly failing over many, many years to win anything big.”

Hibs come in at number six as they haven’t won the Scottish cup in over 100 years, and Monty comes just behind at seven for never having won a major.

The news of Monty’s bad reputation across the water will come as a surprise to his fans who were overjoyed when he grabbed the Ryder Cup captaincy.

But Woolsey writes: “Widely described as ‘the best golfer never to have won a major,’ Monty, now 45, assumed the title once owned by Phil Mickelson.

“The Scot has enjoyed all sorts of success worldwide, with 40 pro victories, but his frustrations in the British Open, U.S. Open, Masters and PGA Championship have assumed the dimensions of a curse.

“In total, he has five second-place finishes, none more painful than the 2006 U.S. Open, when he sank a 75-foot putt on the 17th hole to tie for the lead but then double-bogeyed 18 to lose to Geoff Ogilvy.”

And of Leith’s football team, the Canadian is equally scathing.

“Hibernian’s latest elimination from the tournament came earlier this month, a 2-0 loss to cross-town rival Heart of Midlothian F.C.”

But despite these claims of failure, Woolsey fails to mention that Hibs have won the CIS cup three times since it was introduced in 1947, the latest win being in 2007.

Hibernian FC were unable to comment on their success in the losers poll.

Entitled “Losers Inc: The biggest non-winners in sport” it was inspired by the recent surprising success of Arizona Cardinals, a team who have finally made it to the Super Bowl after over sixty years of failure.

Own goal as Celtic ‘keeper gets speeding penalty