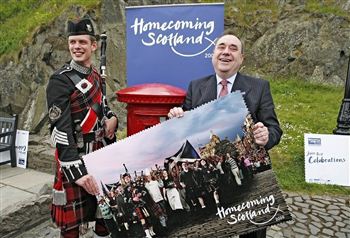 THE OFFICIAL face of the Homecoming Scotland 2009 campaign is bucking the current credit crunch with his own thriving international Scottish-themed events company.

Roddy The Piper, aka Roddy Deans, formed Reel Time Events in 2005 and the young Pipe Major is currently booked solid most of next year.

Roddy, 29, has entertained Hollywood A-listers, played in front of Royalty and was chosen to pipe in the four Scottish Olympic medallists to their official press conference which was beamed around the world.

And the former-Edinburgh University graduate has also formed an innovative new band which offers clients a Scottish dancing extravaganza with a contemporary twist.

With the fusion of bagpipes, accordion, keyboards and computer synthesis, the Reel Time Ceilidh Band has been playing for corporate guests worldwide – from St Andrews night in Athens to Burns Night in Kiev.

The musicians topped off an amazing year when they appeared in front of thousands of music fans at Scotland’s premier pop festival T in the Park, in July.

And Roddy’s already thriving Scottish-experience business is now all set grow even bigger after the talented musician landed the dream job of fronting the Scottish Government’s worldwide campaign to attract the Scottish diaspora to visit the country – Homecoming Scotland 2009.

The Homecoming Scotland 2009 campaign is a year long celebration of Scottish culture, heritage and a celebration of the many great contributions Scotland has given the world.

The campaign also coincides with the 250th anniversary of Robert Burns’ birth.

Roddy said: “The last year has been wonderful for Reel Time. Last Christmas we were invited to Barbados for an event, we then landed the job to give a whisky tasting at the advance launch of the new Rolls Royce Convertible 6, and I’m not long back from the Greece where I played at a St Andrews Day function.

“I was very fortunate to be asked to be the face of the Homecoming campaign because having my face advertised all over the world is amazing for my company.

“We’ve organised many events all over the world, not just in Scotland. One of the most bizarre was just recently when we held a whisky-tasting at the bottom of a quarry in Leicestershire.

“A lot of our business comes from word of mouth and our reputation is increasing all the time.

“But the Homecoming campaign has already started to generate bookings for Reel Time next year.”

Born and brought up in Edinburgh, Pipe Major Roderick Deans attended George Watson’s College before going on to Edinburgh University to complete a business degree.

He qualified as a Grade One piper at the age of 13 and has also won medals at the World Piping Championships as well as being crowned Lothian and Borders Champion in 1997.

After leaving education, Roddy landed himself a three-year residency aboard the five-star Hebridean Spirit cruise liner which took the talented piper all over the world.

Roddy said: “During my time on the cruise ship I played in front of many dignitaries, but since then I’ve been lucky enough to play in front of people such as The Queen, Princess Anne, Boutros Gali, and I was also head-piper at Kiefer Sutherland‘s step-daughter’s wedding.

“These are the kind of bookings we thrive on here at Reel Time.

“I’ve also been lucky enough to feature on a Radio 4 comedy programme where I spent a morning with a family who supposedly hated the bagpipes.

“Luckily, I managed to turn them round.”

The successful businessman has also branched out into online trading when he opened an eBay shop two months ago.

In his online shop, Roddy has started selling whisky tasting glasses and rare bottles of whisky to customers all across the world.

And a new venture is just around the corner for Roddy The Piper as he is currently in the process of setting up the Reel Time Bar where private parties and corporate guests can learn how to mix cocktails professionally.