Mutt gets ready to shoot to stardom

By Cara SuliemanA CANINE mascot is getting ready to be promoted to bombardier after he fires a cannon with his nose.

Blue the Yorkshire terrier has already starred in a ceremony for Greyfriars Bobby, laying a wreath on his grave. 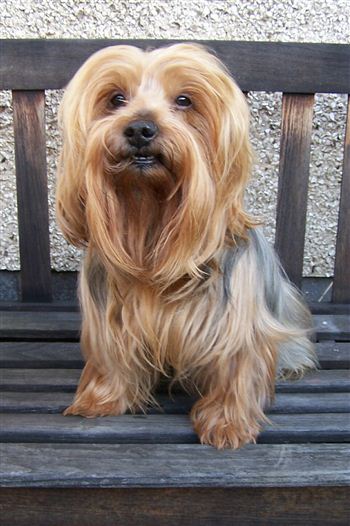 And now the miniature mutt is set to fire his very own replica of the One o’Clock Gun.

The two feet tall model will be operated remotely and Blue will use his nose to press the firing button.

This isn’t the first time the Greyfriars look-a-like has performed in public, he was the star attraction at the faithful pooch’s anniversary celebrations, placing a wreath on the grave.

On that occasion Blue was dressed in a new regimental dress coat with the colours and insignia of the Royal Artillery.

And now the mascot of the One o’Clock Gun Association is preparing himself for his next trick.

The association is hoping to use the scale model to launch their exhibition at Edinburgh Castle, and have started building it already.

George Robinson, the secretary of the group, wants the model to be an exact replica of the original cannon.

He said: “It will probably be fired electronically and we’re hoping the dog will press the button with his nose. We think it would be really funny.

“Blue is a truly unique dog and the sort of things he is able to do are incredible. He’s just a little show-off really.

“Once he has passed his gunnery test and fires the cannon we’re going to add two stripes to his uniform and make him Bombardier Blue.”

Blue will be making his public appearance at the re-launch of the One o’Clock Gun exhibition at Edinburgh Castle later this year.

The little dog’s owner John Lovie, a former RAF aircraftsman, has already got started on the work.

He said: “We’re building it at the moment and I don’t think it will be that long before we have it completed. It will look like a real gun, with the wood at the sides.

“We’re hoping that Blue will be able to fire it with his nose. He uses his nose quite a lot to let people know he’s about.”

As well as making his public appearances, Blue is becoming somewhat of a celebrity in North Berwick, where he lives.

The whole association want the pooch to be made the official mascot for the town.

East Lothian Provost Sheena Richardson said it is a “most interesting idea,” but the council haven’t ruled anything out, stating that it is too early to make a decision.