WHILE heavy snowfall across Scotland caused widespread school closures, these pupils in Edinburgh sought an alternative way to get to class – on a sledge.

As the country woke to blizzards and up to 10cm of snow in higher regions, some schools were forced to close their doors. 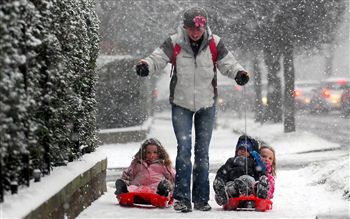 A total of 25 schools in Dumfries and Galloway and the Borders were shut while four primary schools and three nurseries in Fife were also closed for the day.

And flights in and out of Scottish airports cancelled as the snow swept across the UK.

Edinburgh Zoo was also closed for business as the popular attraction was carpeted in snow.

However, the penguins were out playing in the snow for visitors after lunch when the zoo reopened after clearing its paths.

Across the capital, many took advantage of the heaviest snowfall of the winter by wrapping up warm and heading outdoors.

These kids (pictured) heading to school in the Colinton area of the city enjoyed a ride on a sledge as part of their unusual school run.

And students were out in force at Holyrood Park, building a three-tiered snowman.

But forecasters warned the snow showers would continue through the night with up to 10cm lying on high ground.

And severe weather warnings were issued by Traffic Scotland for the Lothian and Borders regions, Strathclyde, Tayside and Fife and Grampian.

Heavy snowfall was expected to hit all roads in Edinburgh and drivers were advised to take extra care on their routes.

Meanwhile, BAA announced flights from Glasgow, Edinburgh and Aberdeen to England were cancelled.

Heathrow Airport was the worst hit with more than 650 cancellations while staff struggled to cleat the snow off runways.

The BAA website reported: “The snowfall has been the heaviest in decades and has meant our operation is even finding it difficult to find empty space to the put the snow.”