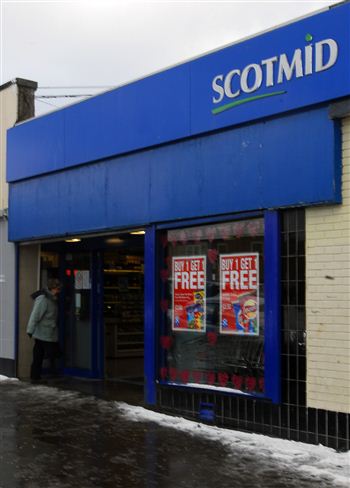 AN armed robber wearing a Shrek mask has carried out an early-morning raid in a city centre shop.

The green-faced thief wielded a knife at the bewildered shopkeeper demanding he hand over cash from the till.

The robber – dressed as the ogre from the computer-animated children’s movie – then fled the Scotmid store in Edinburgh with more than £400.

The cheeky robber was seen running from the shop in the Oxgangs Road North area shortly after 9am on Sunday.

He made off towards Oxgangs Place with the money stuffed into a bag along with 200 cigarettes which he also pocketed.

Apart from wearing the brightly coloured mask with horn-shaped ears, the thief is described as white, 5 ft 9ins of a slim build.

He was also wearing a dark hooded top as well as the green mask which has a large white-toothed grin.

Police are appealing for anyone who may have seen the curious-looking robber fleeing the scene.

Detective Sergeant Grant Johnston, of Lothian and Borders Police, said: “This is a very serious crime in which the suspect has used an unusual method to conceal his identity.

“It’s a fairly large store and was busy at that time of the morning with a lot of people coming and going.

“The green Shrek mask is a cheap disguise and readily available from many shops.

“He was seen removing the mask as he ran up the road carrying a bag and I would appeal for anyone who spotted a man matching this description to get in touch.”

Det Sgt Johnston said the male shopkeeper had not been physically hurt in the attack but was left extremely shaken.

He said: “His major concern was the fact that the suspect was waving a knife in front of his face and he was worried for his safety.

“The suspect was definitely working alone and there was no one else seen with him.”

The name Shrek was chosen for the lead character in the 2001 film as it comes from the German word meaning “terror”.

Austin Powers star Mike Myers provided the voice for the large green ogre who lives in a swamp and craves solitude and privacy.