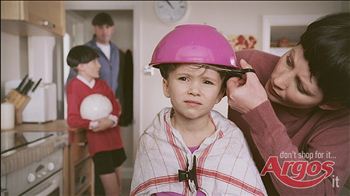 By Cara Sulieman
SCOTLAND’S men have come up with a new way to save money – by cutting their own hair.

A survey by Brylcreem claims that 69 per cent of men across the country are taking their locks into their hands or asking a friend to help them out.

And a further 24 per cent are skipping the snip all together.

But appalled professionals say that they are running the risk of giving themselves the bowl cut look as seen in the TV advert for Argos.

Warning customers that they could end up looking as daft as the family of four in the ad, hairdressers are begging men to put down their clippers and go to the barbers.

Luke Walton, International Artistic Director at Rainbow Room International says there is no excuse for shabby tresses when there are bargains to be found.

He said: “I would not advise anyone to try cutting their own hair at home.

“Hairdressing is all about balance and form and only a hairdresser will get this exactly right.

“Your hairdresser will cut your hair in a style that suits you face shape and you will not achieve the same finish by doing it on your own.

“If you are on a budget, there are many ways to get a discount haircut – check out when your local salons hold training evenings and become a hair model.

“This means a trainee hairdresser will cut your hair but a fully qualified educator checks over all cuts. Many salons and academies offer discounted rates for cut and colour.”

And Toni and Guy said that customers have been flocking to their salons after disastrous accidents with home dye kits.

A spokesman for the fashionable hairdressers said: “After trying to save a few quid by dyeing their own hair, people have ended up spending hundreds of pounds to get it fixed.

“It might seem like a good idea at the time, but you can never get the same results at home that you can from a trained hairdresser.”

But despite warnings, the men of Scotland are brandishing their clippers and getting to work.

In the capital, almost half (49 per cent) the male population are cutting their own hair, with another 47 per cent getting a friend to do it for them.

And along the M8 in Glasgow, 43 per cent of the male population are trimming their own barnet, with 34 per cent trusting a mate with their clippers.

With a country full of bad hair days waiting to happen, Brylcreem’s Style Director Louis Byrne has given wannabe barbers a few tips.

He said: “An easy way to make your cut look refreshed is to give your neck hair a trim.

“Sideburns can be easily trimmed at home and will keep your hairstyle looking fresher in-between salon visits.

“And if you need to trim your hair make sure you point cut rather than cutting in straight lines. This will allow for a few mishaps. Cutting in a straight line will only lead to a disaster.”