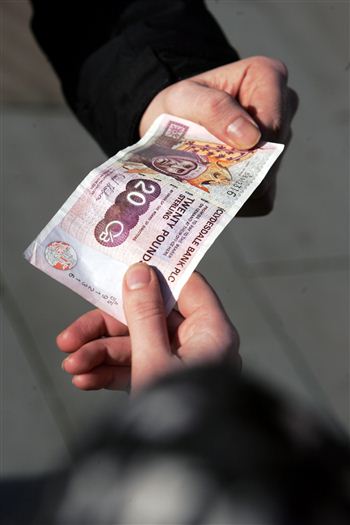 TRAVELLERS at one of Britain’s busiest airports are being charged for changing money – but it’s for exchanging Scottish banknotes for their English equivalent.

The Travelex booth at Newcastle airport charges Scots £3 for the privilege of swapping their notes.

And it’s the only money exchange in the airport, forcing holidaymakers to use their service.

With many shops in England still not accepting Scottish notes, travellers are left with little choice but to stump up the cash.

And if the tourists are well prepared and try to swap their currency before they leave home, Travelex won’t be able to help, as their Scottish branches don’t hold English bank notes.

Derek MacLachlan, 41, from Inverness was travelling through Newcastle Airport on his way to Barcelona when he tried to swap his notes for Bank of England ones.

He said: “I had £70 in Scottish notes and didn’t want to take them to Spain as they can be a bit funny with them sometimes so I went to Travelex to change them.

“The woman behind the counter said it would be £3 to change the notes. I couldn’t believe it.

“It’s bad enough that some shops in England don’t take the notes, but now it’s being treated like a foreign currency.

“It’s legal tender and exactly the same as Bank of England money – it just looks different.”

The father-of-two added: “You would never get anything like this happening in Scotland.”

Starting at £3 for transactions under £300, the charge for exchanges worth more than £500 is 2.5%, leading to a potentially costly trip.

Travelex said that they charge for the transaction as they would charge for every other type of currency change.

A spokesman said: “Travelex charges a standard £3 commission charge on all currency transactions under £500 at its shop at Newcastle airport and if a customer was trying to change English bank notes into Scottish notes the £3 standard charge would apply.

“Scottish bank notes are however legal tender throughout the UK and Travelex would not advise customers to exchange English bank notes into Scottish notes as they will incur the charge.

“Travelex operates shops in airports across the country and at each location transaction prices and promotions do differ due to the variances in operational costs, including rents, round-the-clock staffing, as well as the cost of carrying stock of over 60 currencies.

“All of which are necessary to provide our customers with the convenience of purchasing their foreign currency at the last minute before they fly.”

But politicians are shocked to hear about the charges, saying that it is just another way of alienating the Scottish note.

The SNP MSP Ian McKee, who was born in South Shields, Newcastle, thinks that work needs to be done to change perceptions of the Scottish bank note.

He said: “Refusing Scottish bank notes south of the Border may be the exception rather than the rule, but it is still a cause of embarrassment and irritation. It is high time that this unnecessary problem was resolved.

“What we need is parity of esteem between Scottish and Bank of England notes. Contrary to popular myth, the issue isn’t one of legal tender.

“Strictly speaking, Bank of England notes are not legal tender in Scotland, but clearly and quite properly they would never be refused in Scotland. Scottish banknotes are legal currency, as approved by the UK Parliament.

“We have asked the Chancellor to lead a campaign of awareness raising south of the Border in 2008 – including writing to representative business, retailing, commercial, tourism and leisure organisations and agencies – calling on them always to accept Scottish banknotes as a matter of course.”