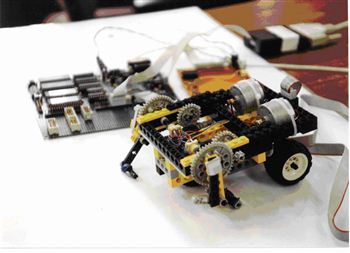 PIONEERING scientists at a Scottish university have invented a robot that can evolve just like a human – bringing the film ‘I-Robot’ one step closer to reality.

The robot brain being developed by researchers at Robert Gordon University grows more complex as it learns new skills, just like a human brain.

The robot brain – called an ‘artificial neural network’ – adds new layers to itself as it grows, becoming more and more complex.

Although the project is currently on hold while the team wait for more funding, the future looks bright as the team hope to use their discovery to help disabled people in their homes.

Dr Chris Macleod, who is leading the research, said: “The beauty of this robot brain is that it appears to have no limit – the brain physically increases in size and learns automatically.

“The robot started off pulling itself along in a primitive way and then went through a series of tests, until it had evolved into a walking quadruped.

“It was able to react to its surroundings, avoid obstacles and react to objects as ‘predators’ or ‘prey’.”

“No other robot in the world can do this, it’s absolutely unique and the possibilities are endless.”

In theory there is no limit to the degree of complexity that can be achieved, and robots with potentially human-like abilities, such as Sonny in ‘I-Robot’, could be designed using the same technique.

In the 2004 film, humans co-exist peacefully with robots, who are used as domestic servants and are as widespread as any other machine.

This is until they overthrow their leaders through a violent revolution, in order to stop humans from destroying the environment.

Dr Macleod was keen to dispel fears of such an uprising occurring as a result of his findings.

He said: “As long as we’re careful, there’s no need for concern.

“A robot designed for household chores would hopefully be neither strong enough nor clever enough to pose any kind of danger.”

There are also many other possible applications of this approach in science, including more advanced prosthetic limbs, electronic design and aerospace engineering.

Dr Macleod added: “It is also possible that by studying the evolution of our robot’s brain, we may shed some light on the earliest origins of life.