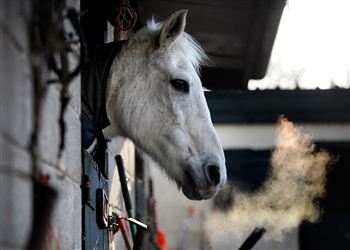 EIGHT burly firemen put their pulling power to the test to heave an elderly horse to safety.

A fire crew from Edinburgh was called out yesterday (Tue) to help free the 36-year-old gelding which had become trapped in its own stable, near Roslin, Midlothian.

Elderly Tally has been a regular at the stables for the past 20 years and is prone to falling over while asleep.

Kirkettle Farm Stables owner Alan Fairlie was alerted to the equine drama around 4am by his dogs barking.

Rushing to see what the commotion was Alan was stunned to see Tally lying on his side still inside his box.

He first tried to move the distressed animal by using his forklift, but after several unsuccessful attempts he called in the professionals.

He said: “Poor Tally is getting on in years and I was so shocked to see him on his side.

“He sleeps standing up, but sometimes when he gets woken with a start he falls over.

“I knew I had to act quickly because of his age and because horses in general get fluid on their lungs if they are on their side for too long.

“I tried to move him with the forklift but there just wasn’t the room. His breathing was getting heavy so I decided to call the fire brigade.

“They arrived really quickly and we had him up within no time. And apart from a few bruises and scratches he’s fine.” 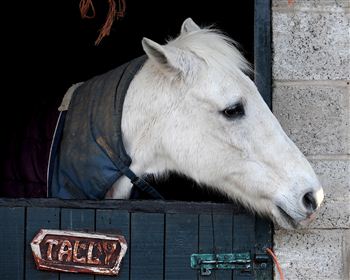 The eight firemen pulled Tally from her horsebox using their hose reels, and managed to get the animal upright with a little help from the forklift.

A spokesperson for Lothian Fire said: “A crew was called out on Tuesday morning to stables in Midlothian to affect the rescue of an elderly horse.

“The crew used hose reels and a tractor to pull the horse back on its feet.

“A veterinary surgeon attended the scene, but the horse was uninjured by the incident.”