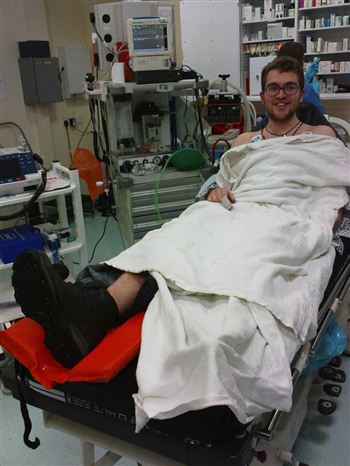 THE son of a top Tory has had his hopes of becoming student union president dashed – after he impaled his foot on a spike.

Edinburgh University student Oliver Mundell – whose dad is Conservative MP David Mundell – was climbing over a fence in the city’s George Square so he could build a snowman with friends.

But he slipped and the metal spike pierced right through his foot, leaving him skewered on the fence.

Two fire engines raced to the scene and Mundell had to be cut free using a hacksaw before he was taken to hospital.

Now he faces a month of campaigning for student president from a wheelchair – dubbed his battle bus – after having reconstructive surgery on his foot.

Hapless Mundell, 19, said: “I had my foot on a wooden board propped against the fence, which gave way and the spike went straight through my other foot.

“It took seven firemen about fifteen minutes to cut my foot free – I’m looking at a lengthy spell in a wheelchair now.”

He denied that he had been drinking before the accident in the early hours of Monday morning.

His father David Mundell has been Shadow Secretary of State for Scotland since 2005, and is the only Conservative MP to represent a Scottish constituency in the Westminster parliament.

Oliver, whose campaign slogan is ‘Funding, Feedback, Freedom’, called his father at 3am to say that his foot had been impaled and that he was being cut free.

He said: “He’s been to visit me in hospital since – he was quite alarmed when I gave him the news.

“Although I don’t totally agree with his political views, I do think the Conservatives give people a clear set of beliefs and values.

“They’re just not necessarily the same as mine.”

The news of his injuries comes just days after campaigning for the prestigious role officially started.

And although the wound might give his competitors a head start they insist there was no ill will towards the Divinity student, from Moffat.

Liz Rawlings, who is also running, said: “None of us want to win this by default by injuries to our competitors so I wish him a speedy recovery.

“It’s an unfortunate injury and hopefully it won’t affect his campaign too much.”

But current EUSA president Adam Ramsey said: “It’ll be very hard work for him to campaign properly – there’s a lot of steps to climb in Edinburgh.

“Running for president is certainly not very easy if you have a hole in your foot.”

A spokesman for Lothian and Borders Fire and Rescue confirmed they were called out to the incident at 1.30am on Monday morning.

This is not the first time a hapless young conservative has caused embarrassment to the Tories.

In January of this year, 23-year-old Matthew Lewis was thrown out of the party for dressing up as Madeleine McCann, and then boasting about it to fellow Tories.