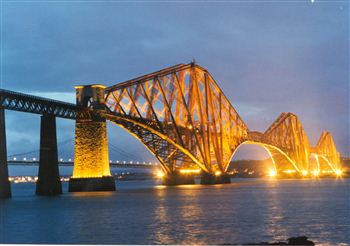 SCOTLAND’S most recognisable landmark is to be plunged into darkness for one hour this March.

The world-famous Forth Bridge joins a list of celebrated structures all over the world that are switching off their lights as part of Earth Hour 2009.

Last year’s event saw the lights go out in 35 cities on all seven continents in a graphic stunt to raise awareness of climate change.

Scotland’s floodlit marvel of engineering will undergo the blackout at 8.30pm on March 28 for a full 60 minutes, at the same time as the Syndey Opera House, the Eiffel Tower and the Millennium Stadium in Cardiff.

Regarded by some as the eighth wonder of the world when constructed, Forth Bridge is Scotland’s biggest listed building and is a major transport artery for Scotland’s train routes.

Ron McAulay, Network Rail Director for Scotland, said: “The Forth Bridge is an engineering achievement which Scots are rightly proud of and we floodlight the structure to celebrate that fact.

“However, climate change is an issue which affects us all and we are pleased to be able to lend our support Earth Hour 2009.”

He added that rail services would operate as normal during the blackout.

Despite it’s global popularity, the event is only two years old – Sydney was the only city to celebrate Earth Day in 2007.

In 2008 more than 50 million people got in on the act, and this year the number of countries taking part has doubled.

WWF, who are backing a new Scottish Climate Change Bill, say that the event is a ‘dramatic hour of action’ that is vital in raising public awareness.

Dr Richard Dixon, Director of WWF Scotland, said: “Climate change is the biggest problem facing the planet and WWF’s Earth Hour 2009 will be the biggest show of support ever.

“People in Scotland can join concerned individuals and communities from over 70 countries around the world in a dramatic hour of action on climate change.

“The Forth Bridge is one of the largest structures of its kind in the world to be floodlit so it being plunged into darkness for one hour will be truly memorable.”