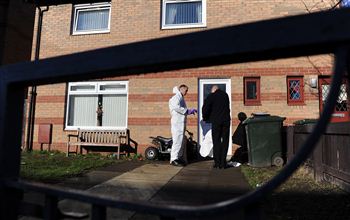 POLICE have vowed to strip criminal gangs of their assets after carrying out a series of raids on the homes of suspected drug dealers.

Detectives searched 18 properties in Edinburgh during early morning raids as part of an ongoing drive to tackle organised gangs in the city.

More than 100 officers were involved in the raids in the Bingham area with 20 people being arrested.

Lothian and Borders Police said the searches were a significant step towards driving drugs off the streets.

Detective Superintendent David Bullen, who is leading the crackdown, said: “We have been gathering evidence and intelligence over a long period of time and we have focused our attention mainly on the supply of cocaine with the criminality that lies behind that.

“We have recovered a number of items which will be subject to further enquiry involving charges of the misuse of drugs and money laundering.

“These serious and organised crime groups use intimidation and violence to support their criminal activities and it is vital that the police continue to use all available methods to disrupt those activities.”

And Det Supt Bullen also vowed to track down gangs who lead extravagant lifestyles funded by their dealing of cocaine.

He said: “These young men are making significant amounts of money which is paying for a reasonably lavish lifestyle.

“They are living and existing in our communities where people are struggling and they are making profits.

“They are obviously living above their means and these are the type of individuals we are taking on, tackling and hopefully taking some of their money from them.”

And Justice Secretary Kenny MacAskill backed up the force’s determination to put an end to the profiteering of criminal gangs.

He said: “We fully support the police operation and congratulate the officers for taking on the criminals.

“Serious and organised crime undermines our communities and distorts a whole variety of matters.

“We are committed as a government to taking them on, taking them down, getting them punished and stripping them of their assets.”

Some of the men arrested will be appearing from custody at Edinburgh Sheriff Court on Thursday on serious drugs charges and are also accused of money laundering.