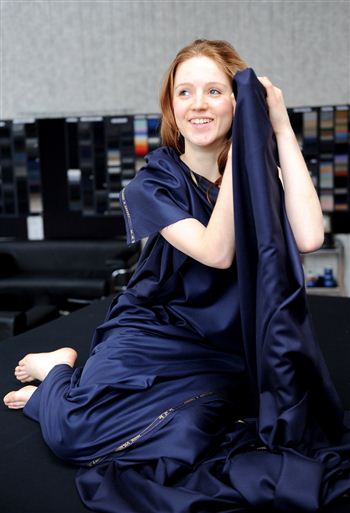 A SCOTS-BASED fabric company is producing the world’s most expensive cloth.

Holland and Sherry have been based in Peebles for over 100 years and the company is famous for clothing Hollywood A-listers such as Nicole Kidman, George Clooney and Tom Cruise.

It has taken the prestigious company five years to gather enough of the special yarn, and another year and a half for them to develop the unique cloth.

And even though it will cost over £3000 a yard for the rare fabric, the firm are bracing themselves for orders to come flooding in.

One of the first to place an order for a £35,000 suit is the mega-rich King of Morocco.

The material comes from the wool of the Vicuna llama which inhabits the high alpine reaches of the Andes.

A rare and extremely shy animal, the llama only produces tiny amounts of very fine wool and can only be shorn every three years.

Holland and Sherry have spun their special Vicuna worsted from llamas in Peru and Bolivia, before having it shipped back to Britain where it is spun at the company’s factory in Yorkshire. 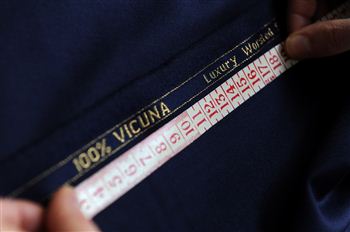 The Scots firm has revealed they have enough material to make just 18 of the ultra-expensive suits, and wealthy customers will only have a choice of three colours to choose from – black, midnight and natural.

Ross Greenshields, Holland and Sherry’s sales marketing manager, said: “There are other Vicuna fabrics on the market, but we have woven the world’s first 100 per cent worsted spun Vicuna fabric – it is unique, it is original, it is exclusive and it is the most expensive cloth in the world.

“We went to the next level. If you picture feeling cashmere – and cashmere feels fantastic – this feels finer.

“Even if you’re not in the business, you could tell the difference – it really is a stand out fabric.”

The company, which was founded in 1836, has offices in New York, Paris, Milan, Sydney, Shanghai and Savile Row, London.

Recently the Borders company has clothed both Nicole Kidman and Hugh Jackman in the hit movie Australia, as well as having their cloth used in Harry Potter, Moulin Rouge, Ocean’s 11, 12 and 13 and prison film The Green Mile.

This year Hollywood heart-throb Johnny Depp will wear Holland and Sherry in Public Enemies – a crime drama set during the Great Depression.

British movie stars Kiera Knightely and Sienna Miller have been seen around town wearing Holland and Sherry attire, while top designers Versace and Thom Browne are also regular customers of the Borders-based firm.