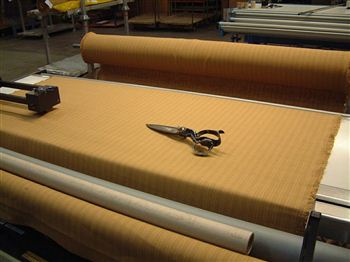 FABRIC made in Scotland has been flown to America to be used for curtains in President Obama’s bedroom.

The pure wool cloth produced by a Perthshire company has been ordered to make up all the curtains for the Obama private quarters in the White House.

And staff at the firm’s weaving depot in Keith, Morayshire, was told who their famous client was just ten days before Barack’s inauguration.

Now, the order has been completed in less than four weeks and is on its way to Washington to hang in the private rooms of America’s top family.

Blair Macnaughton, managing director, said all 82 workers were incredibly proud of helping out their most powerful customer.

Mr Macnaughton said: “The United States represents a huge market for us with Americans loving the quality fabric which is 100 per cent Scottish.

“But when we were told we would be working for the most powerful man in the world we were understandably pretty chuffed.

“It is a really nice thought to know that our fabric is going to be used in the Obamas’ own rooms.

“The whole thing has given all the staff a really good boost to morale.”

The textile company has been designing interior fabrics and kilts since 1783 and Blair, 55, is the seventh generation boss.

The firm was contacted by interior designer to the stars Michael Smith who was hired to help revamp the family home in the White House vacated by the Bush clan.

Smith, a California-based designer, has a list of celebrity clients including Steven Spielberg, Dustin Hoffman and supermodel Cindy Crawford.

The order for the ecru stripe Scots fabric was placed just before Obama took up office when wife Michelle decided the White House needed a more “family-friendly feel”.

Mr MacNaughton said: “It really is a fantastic contract for us to get – we have the most powerful man in the world looking at our fabric every day.

“The cloth was made in Scotland with love and care and we’re sure President Obama will be very pleased with it.”

TEFL careers soar throughout California in spite of the pandemic