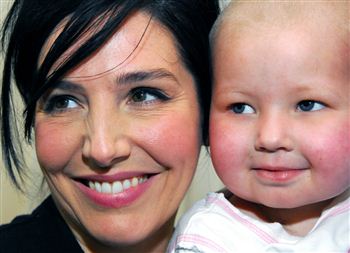 By Cara Sulieman
A TODDLER with leukaemia who touched the heart of Sharleen Spiteri has died in her mother’s arms.

Bethanie Thomson, 3, received a stem cell transplant from her baby brother after being diagnosed with the disease aged just six months.

But the tragic tot, from Wallyford, East Lothian, lost her fight for life on Wednesday surrounded by her mum Vikki, dad Stuart and brother Joshua, 1.

Last night her parents were too upset to discuss their loss.

But Bethanie’s website has been flooded with tributes – including one from Vikki, who described her daughter as her “brave wee star”.

She wrote: “I’m so very proud of you in every way possible. You are such an inspiration to us all, you were so very brave all the way to the end.

“You will be sadly missed by everyone who met you and never ever forgotten.”

Spiteri met with the family last May as part of her work with CLIC Sargent and was so inspired by Bethanie’s plight that she even gave her a mention during her appearance on last year’s Children in Need appeal.

She said: “I do work with CLIC Sargent and there is one little girl out there, Bethanie, who is not very well.

“I’ve been lucky enough to spend some small moments with Bethanie and she has amazed me.

“To see someone so young be so aware of their situation and yet so full of life is both humbling and inspiring.

“The strength her family has shown in astounding. My love goes to Bethanie and her family.”

Although the tot was thought to be getting better, the family were shattered when they found she was relapsing at the end of 2007.

Just weeks before baby Joshua was born, the news hit the family hard.

But a ray of hope came when the baby was found to have the same blood type as Bethanie, allowing him to donate stem cells to his older sister.

Just days after he was born, doctors took stem cells from the little boy’s placenta and froze them before starting the treatment to save Bethanie’s life.

Doctors thought the treatment was working, but just before Christmas Bethanie fell ill again and was taken to Rachel House hospice in Kinross.

She passed away in her mother’s arms on Wednesday – alongside dad Stuart Jackson and brother Joshua.

Bethanie’s aunt posted a message of thanks to all those who had helped the family get through the last few years.

She said: “On behalf of Beth’s mum and dad, I would like to thank every one of our members for being so kind and supportive through this very difficult nine months.

“Your comments and prayers have meant so much to our family.”