Truck gets stuck in bridge blunder 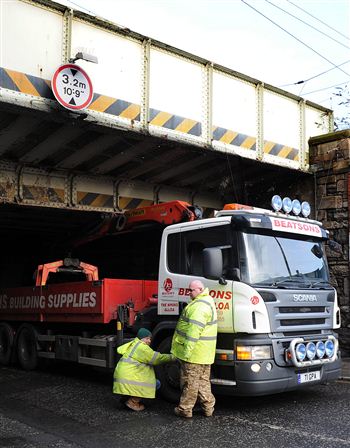 By Cara Sulieman
A LORRY got stuck yesterday after trying to manoeuvre under a railway bridge and catching the crane it was carrying on a low beam.

The Beatsons Group lorry was carrying a crane which caught on the under side of the bridge, trapping the driver and his vehicle.

The road in Edinburgh was blocked off for two hours while police tried to free the truck.

Engineers from Network Rail inspected the bridge on the corner of New Street and Calton Road before giving it the all clear and letting the police concentrate on getting the stranded truck out.

The shame-faced driver, who didn’t want to be named, said he had never had problems driving the lorry around Edinburgh before.

He said: “I’ve driven the very same truck down here before but never had the crane on top. I just didn’t think it would get caught on the bridge.”

John Fairly from Beatsons said that the truck managed to get out after the tyre pressure was lowered.

He said: “The lorry got caught on one of the beams under the bridge. The air was taken out of the tyres to lower it that little bit and the driver got it out.

“There’s a little bit of damage to the crane and the lorry but they’ll be easily fixed.

“It’s not the sort of thing that happens every day, thank goodness.”

A spokesman for Network Rail said that the impact hadn’t caused any damage to the bridge and train services were unaffected.

He said: “Our engineers got out there straight away to check the bridge. It was found to only have superficial damage and was declared safe for trains to continue using it.

“We are confident that the bridge is stable and won’t be damaged by any attempt to remove the vehicle.”