Lothian power station is the worst polluter in Europe 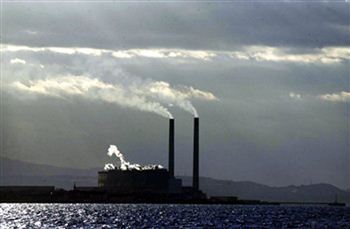 A SCOTTISH power station has been branded the filthiest in Europe.

The coal-fired plant at Cockenzie belches out pollution that causes acid rain.

Longannet power station near Fife was also named as one of Europe’s worst polluters.

This is despite new technology being introduced to the plant – once Europe’s largest – to reduce emissions in 1999.

“It’s very bad news for those with complaints like asthma or emphysema.”

Nitrogen oxide – or NOx – is a deadly gas that causes breathing difficulties, stunts the growth of crops and can even form smog.

Scottish Power insisted that they are investing over £35 million pounds to reduce emissions levels from Scotland’s polluting power stations.

A spokesman for the energy giants said:” We are trying to ensure that harmful emissions do not impact local air quality.

“The station also complies with legislation on emission controls.”

The Scottish Environmental Protection Agency agreed, saying the improvements were underway at both plants to reduce the spread of deadly pollutants.

The UK dominates the environmental hall of shame – the top three of Europe’s worst polluting power stations are based in Great Britain.