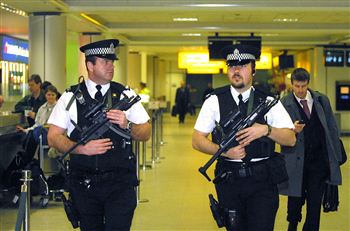 SCOTLAND’S armed police officers have been banned from the London Olympics after failing to hit the target in shooting tests.

A report, ordered by the Queen, found that only one of Scotland’s eight forces is qualified to join the huge anti-terror operation at the 2012 Games.

The report said Scottish officers “would not be accepted for deployment” after shortcomings in achieving the National Police Improvement Agency firearms certificate.

Every English force has gained their NPIA certificate, effectively qualifying them to be picked to help out at the Olympics.

But only Strathclyde police have got the qualification, and even then it’s only at provisional level.

Lothian and Borders police have applied for theirs, but are said to be nowhere near the standard needed to fend off terrorists at the 2012 Games.

A report by Her Majesty’s Inspectorate said: “The current lack of licensed training in Scotland is such that the NPIA foresees difficulty with obtaining mutual aid from Scotland for the Olympics.

“The recommendation would be that Scottish officers would not be accepted for deployment.”

A retired arms officer commented: “Some of the smaller forces have a cowboys and Indians approach to firearms.

“There is a UK national standard and a lot of Scots forces just wouldn’t meet it.”

Scottish Labour’s justice spokesman Richard Baker said: “It needs to be a government priority to ensure the police can protect their citizens and work in conjunction with other forces.”

A Scottish Government spokesman said: “We are sure our police forces will take the necessary steps.”