Give the pup with no nose a home 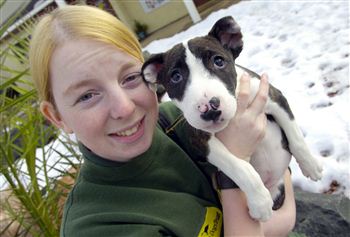 A PUPPY with no nose is struggling to sniff out a home.

And despite her playful nature and huge puppy-dog eyes, she’s been ignored her whole life because of her birth defects.

Half a dozen families have refused to give her a home, turning their own noses up at the noseless pooch.

Worried staff at the West Calder Dogs Trust are anxious to find a home for the tiny brindle and white collie-English bull terrier cross.

But staff at the rehoming centre insist the excitable wee pup could not be more perfect.

Claire Cairney, assistant manager at the centre, said: “Clay is a lovely puppy.

“She is missing part of the front of her nose and her nostril passages are very narrow.

“Part of her left ear has not formed properly either.

“We’re worried her nose deformity might be putting people off rehoming her – six families all took a look at her but they all decided against rehoming her.

“Puppies are usually rehomed really quickly, within a few days, but we have had Clay for three weeks so it’s quite unusual.”

Part of an unexpected litter of five, staff at the kennel named them after rocks because “they looked sturdy.”

Clay still has her brother Slate and sister Quartz for company at the centre.

Dog experts at the West Lothian kennels say they don’t envisage Clay having any medical problems in the future.

And even if she does, they’re so in love with Clay that they’ve vowed to help the new owners to pay for any medical bills.

Miss Cairney added: “It’s an obvious deformity that people can see as soon as they look at her.

“People might be worrying that there could be problems in years to come but as far as we can tell there is nothing wrong with her health wise.

“Hopefully her nose deformity won’t cause her any problems in the future, but if it did, we would offer financial support.

“It’s a shame that she’s been here for three weeks now when she should really be in a loving home. She’s a perfect little puppy.”