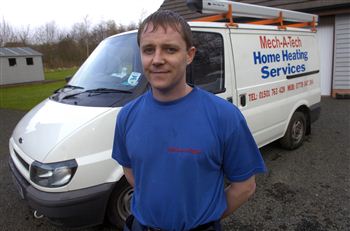 A BRAVE ex-soldier is being hailed as a hero after he chased a car thief and forced him to dump his haul of stolen property.

Thomas Dunnachie, 29, was just arriving to start an early morning job in Edinburgh’s plush New Town when he heard a car alarm going off.

Looking up, the former squaddie spotted a man acting suspiciously and chased him 200 metres along the street.

The panicking thief made off, but was made to drop his rucksack containing over £1000 of stolen electrical equipment he had just nicked.

Mr Dunnachie managed to retrieve all the stolen property before calling the police.

Currently working as a heating engineer, Mr Dunnachie served his country for seven years in the 1st Battalion Argyll and Sutherland Highlanders which included several dangerous tours in Northern Ireland and Iraq.

The early-morning car thief had smashed up to ten vehicle’s windows in and around Albany Street in Edinburgh during the early hours of Saturday morning.

Mr Dunnachie, from Grangemouth, West Lothian, said: “I was standing outside my works van in the middle of the street after arriving for the job. I heard a noise and realised it was a car alarm.

“I then saw a guy standing up next to the car and I just knew he was up to no good.

“As he walked up the street towards me I shouted at him, but he just took off.

“He knew I was catching up with him, so after about 200 metres he just ditched the bags he was carrying.

“I didn’t want to take the risk of struggling with him on the ground if I caught up with him because he could have been carrying a knife or a screwdriver.

“He had dropped a rucksack and plastic bags and they had stereos and iPods inside.

“Thankfully nobody was hurt, and everyone managed to get their property back. That’s what counts really.

“I’m a hard-working guy, and the thought of somebody just robbing innocent people is something I couldn’t let go. I only did what anyone else would have done.”

The suspect is described as white, mid-to-late 20s, 5ft 7ins to 5ft 8ins tall, unshaven, with dark unkempt hair.  He was wearing a navy fleece jacket, and carrying a dark rucksack.

He may also have been wearing a woollen hat while carrying out some of the thefts.

A police spokesman said: “Mr Dunnachie’s intervention played an important role in recovering the stolen goods, and we recognise the efforts he made in attempting to bring the suspect to justice.

“While the stolen items were recovered, the suspect has caused approximately £1000 worth of damage as a result of smashing the windows of these vehicles.

“We want anyone who was in the New Town area overnight between Friday and Saturday, and noticed anyone acting suspiciously there, to contact police immediately.

“Similarly, anyone who recognises the description of the suspect should also get in touch.

“At this time we would like to advise people not to store valuable electrical items in their vehicles, and if they do, to keep them out of sight.”