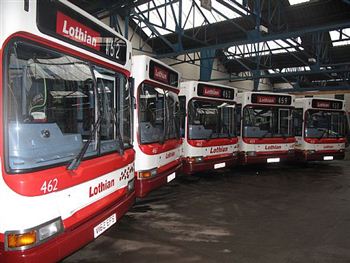 EVER fancied packing your bags and heading off on holiday with over 80 of your friends and family?

Well now is your chance as Lothian Buses have decided to auction off their unwanted, old double deckers to the public for the very first time.

Twenty buses are currently for sale through an online auction house as Lothian makes space for 40 brand new vehicles to add to its 700-strong fleet.

The company’s surplus buses are usually offered for sale to existing companies, but this is the first time it has offered its old vehicles to the general public.

Ten 81-seat double-deckers are being sold for as little as £2000, while ten newer 42-seat single-deckers will set buyers back only £9000.

Web-based industrial auctioneers Sweeney Kincaid have been appointed to market the unusual sale.

Bill Devlin, Lothian Buses engineering director, said it was an exciting move opening up “another sales channel” for the surplus fleet.

Despite the recession, the auction company has seen the number of buyers taking part in its online auctions treble, with sales doubling in the last six months.

Russell Kincaid, managing director of Sweeney Kincaid, said: “We’re delighted that Lothian Buses has chosen us to help them sell surplus assets while they add new vehicles to their fleet.

The double and single-decker buses are between nine and 20 years old and according to Mr Kincaid are in immaculate condition and have been maintained to the highest of standards.

The auction will run until next Thursday, with successful bidders having to collect their new buses from storage in Edinburgh.

But it is not just the individual traveller who will be interested in the auction as other industries have adopted them over the past few years.

Buses are regularly converted into information centres, libraries, museums, cafes and even homes.

And in recent years there has been a huge surge in the popularity of ‘party-buses’ which cater for stag, hen and birthday parties.

Ironically, Edinburgh’s beleaguered tram bosses are planning on using a bus to tour the city’s schools to promote their controversial scheme.