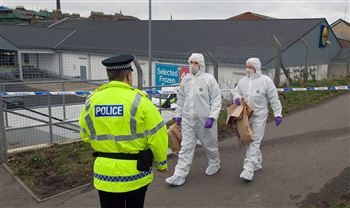 A WOMAN was raped for seven hours after being blinded by a noxious spray as she walked home in broad daylight.

Two men, described as Eastern European, dragged the helpless 24 year-old Australian national from an underpass into a den in bushes at 3pm on Monday.
Police say she suffered a “sustained sexual assault” which they believe was premeditated.

She eventually escaped at 10pm after bravely talking the thugs into letting her go.

The pair struck as she walked from Edinburgh’s Fountainbridge leisure complex towards Dalry, close to Heart of Midlothian’s Tynecastle football ground.

Her ordeal has sparked a manhunt for the pair, with 30 police officers dedicated to the investigation.

The attack took place behind a Lidl supermarket opposite a primary school, a playpark and a 24-hour garage.

One of the men cops are looking for was wearing a blue raincoat emblazoned with ‘New Zealand.’

He is around 6ft tall, of medium build with a dark shaved head and bad teeth, while the other man is shorter in height, with short blonde hair, and was wearing a black waterproof jacket with knitted sleeves.

The victim is now recovering at her home in Edinburgh.

Police are appealing for anyone who was in the area at the time, or who uses the underpass regularly, to come forward if they recognise the description of the suspects.

Eric Milligan, a local councillor and former provost for the capital said he was “absolutely gobsmacked” that nobody witnessed the attack.

Superintendant Allan Jones said: “The trauma she has went through was unbelievable. Despite this protracted series of attacks in a makeshift den she has maintained a form of dialogue which allowed her to be in the position where she has contributed to her release.

“It is very commendable the way she has behaved during this traumatic set of circumstances.

“I would not describe it as a kiddie’s den that is for sure. We will be pursuing this vigourously.”

He confirmed that police were carrying out door to door enquiries and have been in touch with local businesses to view CCTV footage of the area.