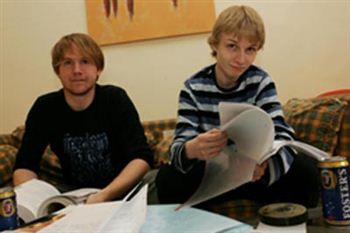 STUDENTS at St Andrews University are so desperate for housing that they have resorted to camping out on their letting agent’s floor – in the middle of their exams.

Office manager Stephen Brown opened up his letting agency after seeing exhausted students queue up for hours to secure lists of available flats.

Staff at the elite university have urged students not to panic, saying that there is “plenty of accommodation to go around”.

Demand for student housing at Scottish universities has reportedly reached unprecedented levels, with letting agencies receiving applications up to nine months in advance.

Colette Murphy, director at Braemore Property Management, said: “We are getting several calls every day from students looking to see what is available, but we are telling them all that they will have to wait for another month before they can put down a deposit.

“The demand for four and five bedroom properties has always been fierce with students looking to get in early and secure the best ones – there is still a shortage of traditional student flats that have HMO legislation.”

St Andrew’s University, voted the best Scottish university two years out of the last three, has felt the property squeeze after a surge in student intake a year ago.

The university has told students to sign up for halls of residence in case they miss out on flats – a plan which has not proved popular with students.

Jennifer Dixon and Collette Oliver, both 19, missed classes on Monday morning to queue for the housing list and said that the system was a mess.

Collette, from Glasgow, said: “The day of our exam, people had to queue in the morning for a list, so we couldn’t go.

“We were told the lists wouldn’t clash with the exams. This is the first day of the new semester and we’ve had to miss a class to get this one.”

Jennifer, from Sunderland, added: “There’s more competition because our intake was bigger.

“The uni tells you to sign up for halls as a back-up plan, but we really don’t want to go into halls again.”

The exam period at St Andrew’s runs from 10-20 January, and during this time many letting agencies released their lists of accommodation for next year.

The huge rise in demand has led many firms to try different ways of releasing details of available flats to students, including via the Internet and even through word of mouth.

Mr Brown, of Eve Brown Property Management, said: “There is never a right time – It’s difficult, when the uni has expanded so rapidly.”