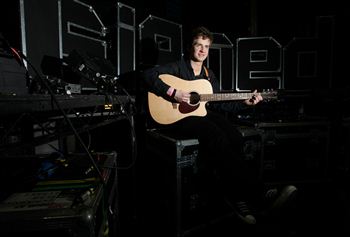 By Cara Sulieman
SCOTLAND’S next big thing in music has been given leave from his university course to pursue his dream.

Tommy Reilly won Channel 4’s Orange Unsigned Acts competition last month and has now been given the blessing of his lecturers at Glasgow University.

The 19-year-old – who is studying Electronic Engineering – will be welcomed back by the university whenever he wants to finish his course.

Nick Bailey of the Engineering department said: “Failing to hand in coursework and missing tests is not something I would normally condone, but in this case, I think Tommy would be mad not to have a shot at stardom.”

And the senior lecturer went as far to say that the break would help Tommy with his academic studies.

He said: “Tommy’s course is Electronics with Music, so for him it’s a bit like an industrial placement.”

The Torrance teenager shot to stardom on the TV show and it now preparing to play a number of gigs in Scotland whilst he works on his debut album.

And his supportive tutors are prepared to wait whilst the talented Scot fulfils his dreams before returning to his degree.

Dr Bailey said: “We would certainly welcome him back to complete his studies.

“There is a limit on the length of time you can take to complete an engineering degree, but if Brian May can complete his PhD after 36 years, I don’t see why Tommy couldn’t return to finish his course later if he wanted to.

With his first single ‘Give me a call’ shooting into the top 10 and most of his upcoming gigs sold out, it looks as if Tommy’s break from his degree might be a little longer than expected.