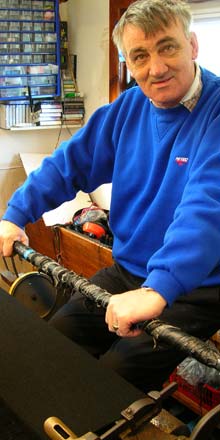 A TINY Harris Tweed weaving company who supplied the material for shoes worn by Madonna has hit the jackpot with another huge contract.

Luskentyre Harris Tweed has just signed a lucrative deal with shoe giant Clarks to supply over 1000 yards of the fabric for their new range of desert boots.

Weaver Donald John MacKay is currently making tweed for two types of Clarks’ boots and hopes if the style catches on the shoe company will increase their already substantial order.

The Harris Tweed industry as a whole is also hoping to cash in on the mega-deal.

The one-man operation on the Isle of Harris hit the headlines five years ago when MacKay landed the contract to supply Nike with 10,000 yards of the world-famous cloth for an exclusive range of new trainers.

Tweed had long tried to break free from its staid, old-fashioned image and the Nike contract helped the fabric gain some valuable street-cred.

The coarse-chequered cloth was subsequently championed by fashion icons such as Ralph Lauren, Madonna and Sex and the City star Sarah Jessica Parker.

Mr MacKay is now hard at work completing over 1,000 yards of material for the high-street footwear specialists Clarks, which will go to making the new ranges of women’s boots and desert boots this summer.

The weaver is still being coy about the new deal but has admitted he hopes the boots will prove popular and that more tweed will be needed. 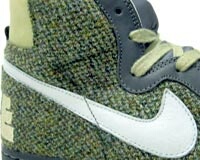 Steve Hooper, marketing manager for Clarks, said: “One of the styles will be a ladies high 1970s boot and the other will be in the desert boot, which was the brainchild of desert boot designer Nathan Clark.

“We are celebrating the 60th anniversary of the desert boot next year and we wanted to use top-quality British materials to style the desert boot to commemorate each decade of the 60 years.

“The Harris Tweed desert boot we felt reflects the 1950s and it will be available in August.

“The boots will be available from 30 of our own stores, online and also in wholesalers and other top show shops.
The idea came from Sebastian Edwards, who is a descendant of Nathan Clark, and he has a good understanding of the materials required.”

But the Harris Tweed industry was criticised when it failed to capitalise on the potential of the link with Nike, which came through Mr MacKay’s own initiative.

It is now understood the Harris Tweed Authority is considering how this latest contract could be used to raise the cloth’s profile.

Mr MacKay’s methods of working haven’t changed in the near 40 years he’s been weaving Harris Tweed in his compact loom shed which overlooks the golden sands of Luskentyre beach.

He landed the huge contract with Nike in 2004 when the sports giant was looking for a way to update a trainer called The Terminator, a basketball shoe from the 1980s, and wanted to use Harris Tweed as a key part of the design.

Scots islander finds thousands of midges trying to get into home